French artist Bénédicte Bresson incorporates plant materials into her tapestries to present a unique perspective of the landscape around her. Her husband, Louis-Marie Bresson, a former soil scientist, collaborates with her, collecting sand, soil and rocks that are crushed down to create unique “earth paintings”. 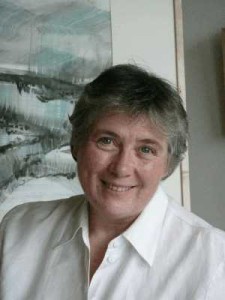 “When the hands are busy, the mind is free to follow its own way,” says Bénédicte, who made her first tapestries in the 1970s after discovering the beauty of wool in Tunisia.

Since then, her artistic career has led her in many directions and to work in various mediums, but the common thread throughout has been the way she highlights the often-overlooked “small things of Nature”.

The Bressons have a holiday home in the Jura Mountains of France, a wine region that is a rich source of inspiration and materials for the couple’s creativity.

Hence their exhibition, Paysages viticoles du Jura (Vineyard landscapes of the Jura) was born. On display at the Vine and Wine Museum in Arbois since April, it presents a unique perspective of eight sites in the Jura region: Arbois, Château-Chalon, L’Etoile, Montigny-lès-Arsures, Poligny, Pupillin, Rotalier and Salins-les-Bains (love the last name!)

There are at least two works representing each site, one a plant tapestry with twigs, vine cuttings and other plant materials woven into the threads, the other an earth painting drawing on topographical maps, aerial views and other perspectives.

For example, Château-Chalon, an appellation dedicated exclusively to the production of vin jaune (“yellow wine”) from the Savagnin grape, is depicted from the same perspective albeit in two very different forms.

Montigny-lès-Arsures is depicted with a tribute to Louis Pasteur, for this is the village where he grew up and where he had a vineyard that still exists today. It was here that Pasteur conducted experiments proving that the yeast needed to ferment wine existed in the air around the grapes, rather than in the fruit itself.

The talented Bressons are now on an extended visit to Australia, where they are collecting samples and creating Australian landscapes. There’ll be more about that in a future post, but in the meantime, European readers should catch this unique exhibition while they can.

Photos © Bénédicte and Louis-Marie Bresson; reproduced with their permission.