The lights are warming up, the music is getting louder – the stage is set. Vivid has descended on Sydney.

Drums made from plastic containers are being thumped and pounded as I’m standing in front of The Star. In time with the beat, the trees light up, accompanied by the sound of fireworks in what’s known as Pyrmont Pyro. This digital fireworks display in Pyrmont Bay Park is totally captivating.

The lightest and brightest, and now perhaps even the loudest, festival this country offers, Vivid Sydney is a hit with visitors and locals alike. Festival goers have even more to love this year, with new precincts like Chatswood and Chippendale’s Central Park adding to installations in The Rocks, Circular Quay, Darling Harbour, Walsh Bay, Martin Place, The Star & Pyrmont.

Seven years since it first began, the festival can only be described as sensory overload, with the Sydney Opera House, Sydney Harbour and other iconic landmarks and urban spaces transformed by 3D projections and more than 60 light installations. It’s a journey of creative discovery with light, music, sculptures and ideas as the platform. See the harbour in a new light as the sails of the Opera House are transformed into a living mural, boats change colours and the city skyline is illuminated in a rainbow of lights.

Make sure you visit the Argyle Cut with its flowing imagery of birds, marine and animal life and words from Sir David Attenborough, from 7pm each week night, 6pm on weekends. 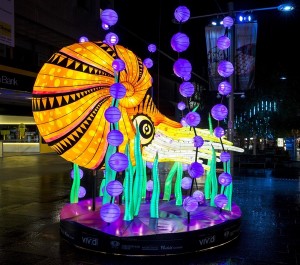 Are you a Presets fan? If so, you won’t want to miss the Laser-Fountain Water Theatre, right by Harbourside Shopping Centre. With jets shooting water 30 metres into the air and complete with spirals, lasers and dancing flames, the show is choreographed to an awesome soundtrack created by the Australian duo. Be sure to visit The Star, where there is a sweet pop-up dessert bar with Vivid Treats created by Executive Pastry Chef Buddika Gunawardana. Think fairy floss, warm crepes and hot chocolates.