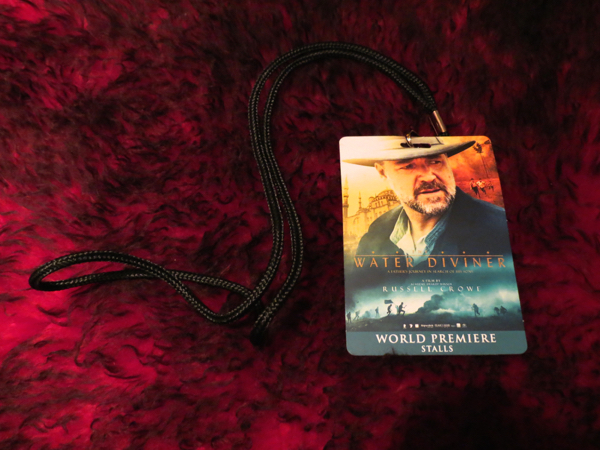 This time last week we were in Sydney for the world premiere of The Water Diviner, a new film by Russell Crowe that I’m predicting will be a blockbuster. We’re not normally on the A-list for movie premieres but we were lucky enough to win this incredible trip courtesy of a competition in Brisbane’s bmag. Woo hoo! It was definitely my lucky day. 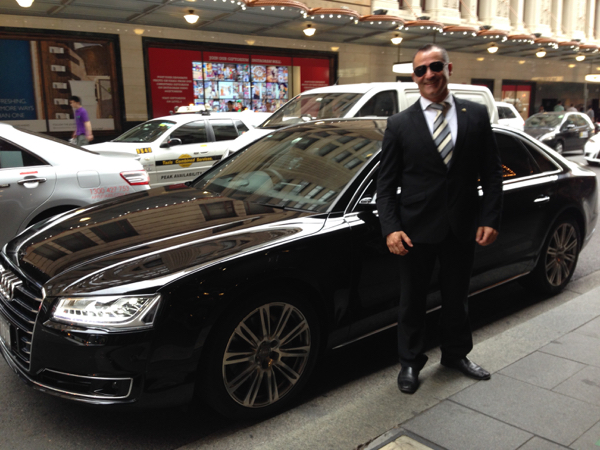 Our prize included Qantas flights and a chauffeur-driven car from Sydney airport. George was waiting to greet us and to take us to the uber-cool QT Hotel. A lollipop gal with flame-red hair ushered us into the lift that took us up to the reception floor of this dark, broody, theatrical hotel. 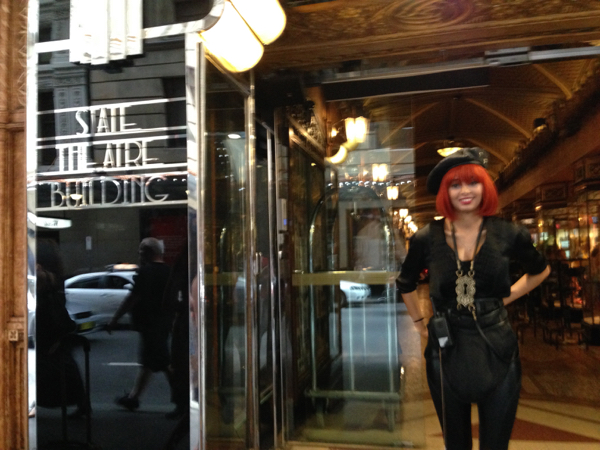 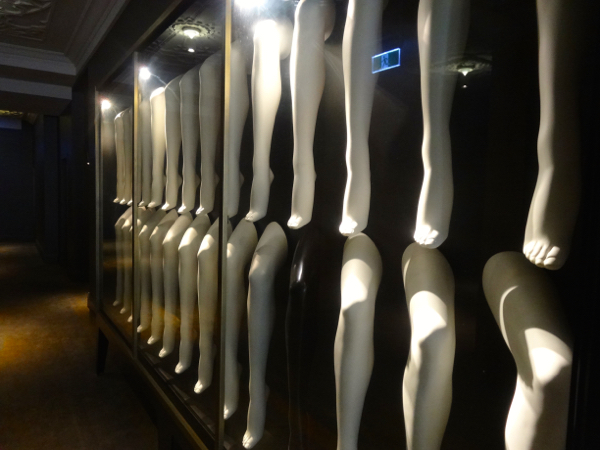 It’s located in the old Gowings department store and there are vintage reminders everywhere, along with lots of theatrical flourishes in keeping with its location next door to the gorgeous old State Theatre. 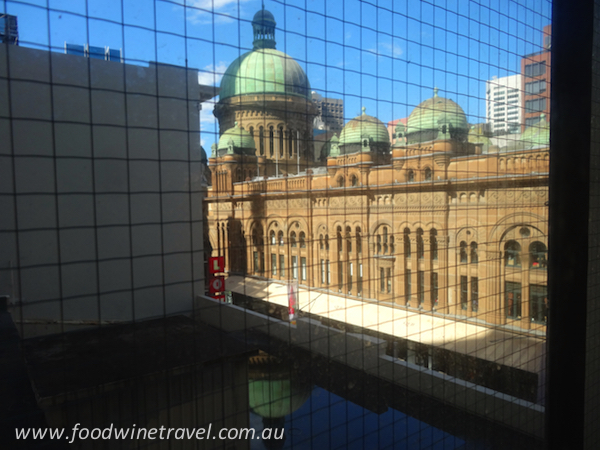 We’d been booked into a room with a wonderful view of the Queen Victoria Building but with single beds! Now I wasn’t going to be separated from my love during a luxury getaway so a quick call to reception and the beds were joined to make a king. Have you ever wondered how this works? I can tell you with good authority, since I watched it being done – the beds are pushed together and a long strip of Velcro-backed fabric is placed on top of the join, so that it attaches to Velcro strips on the inner edge of the singles. This holds everything firmly in place and then a mattress topper is put over the whole lot so you don’t feel the join. That’s the theory. 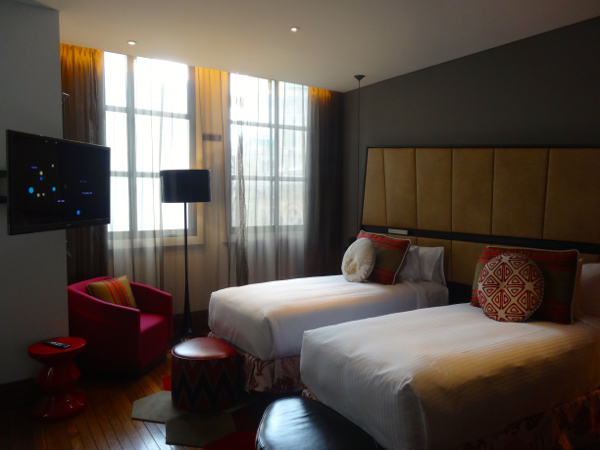 In reality, there was an obvious hump over the join and my side of the bed sloped away so much I felt like I was about to roll out of bed. Another call to reception and we were moved to a different room for the second night, one with a regular queen-size bed that, blessedly, was very comfortable. The room was a bit smaller than the first one but was nice and bright with a view of the lion sculptures on the building’s Market Street façade. 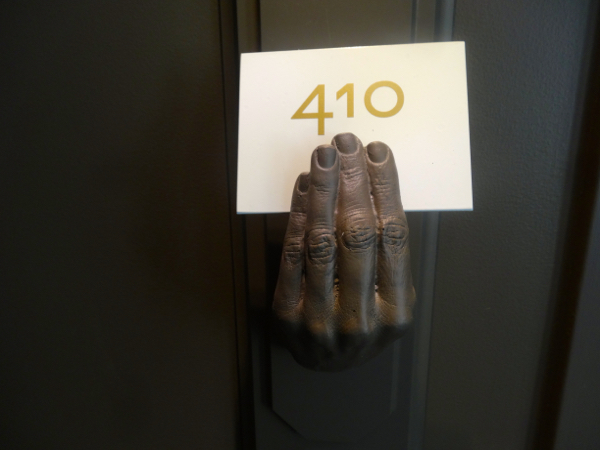 We had a day and a bit to enjoy the hotel, wander around the CBD and do some Christmas shopping. We met a friend in the hotel restaurant, Gowings Bar & Grill, which does great coffee, and we treated ourselves to a further coffee fix and some festive macarons at a café in the Queen Victoria Building. 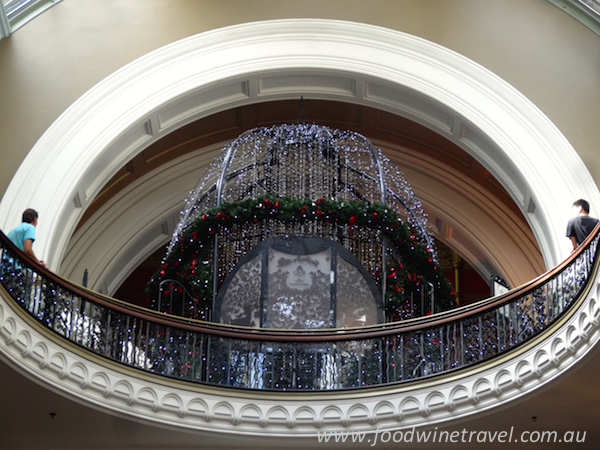 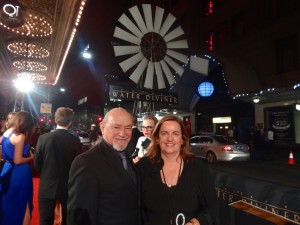 And then it was time to walk the red carpet! I have to admit that we felt a wee bit special as we made our entrance under the glittering lights of the State Theatre. We were already seated by the time a lot of the actors and celebrities arrived, and we watched their arrival on a big screen inside the theatre. Russell Crowe spent a long time mingling with the crowds that had assembled on the street outside (so I didn’t get close enough to lick his arm as one of my girlfriends asked me to do!) But he came on stage to introduce the film and he left his cricket bat on stage for the duration of the film – not only in tribute to cricketer Phillip Hughes but also relevant because of a scene in the film (I won’t say any more because I don’t want to spoil it, but you can read Maurie’s review of the film here and I urge you to see it when it is released on Boxing Day).

The Water Diviner is Russell Crowe’s directorial debut and it’s a ripping yarn cleverly timed to coincide with the anniversary of Gallipoli next year. We visited Istanbul and Gallipoli a few months ago and recognized a lot of the settings in the movie. Yilmaz Erdogan, who plays the Turkish general, sat with Rusty in the dress circle during the screening and the two of them got a rousing ovation at the end. Everyone at the premiere was given two boxes of Turkish food – one savoury (with dips and a wrap) and one sweet (Turkish Deligh, baklava etc) – which we snacked on while watching the live broadcast screening inside. The Champagne flowed freely and Maurie had a pleasant one-on-one chat with Ray Martin about the First Contact series that recently screened on TV.

After the movie, we shamelessly hung around soaking up the atmosphere and star-spotting as all the guests emerged from the theatre. The child stars of the movie were clearly enjoying being in the limelight. 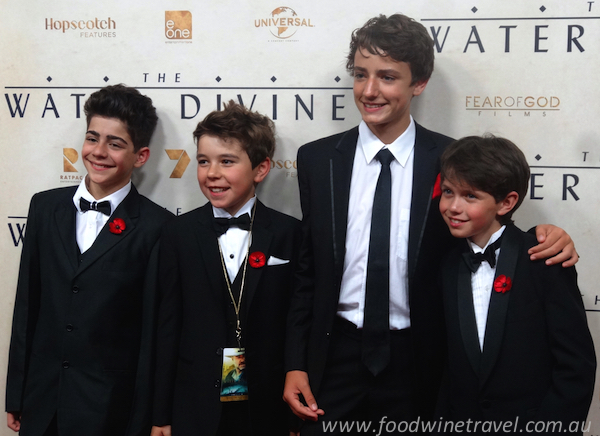 We followed the crowd back to our hotel next door, and rubbed shoulders with Jack Thompson as we went to the bar for a nightcap. But unlike Jack, there was no gold pass on our lanyard and the bar was sadly closed to mere mortals like us. Our moment in the limelight was not yet over entirely though, as the next day a chauffeur-driven car was waiting to whisk us back to the airport. And then … hello real world!