From the age of 16, he kept a regular journal, and when he spent a year on Heard Island in 1953, he typed up copies of his diaries with carbon paper and later deposited them with various libraries. 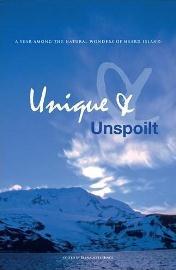 Clearly he hoped that they might be published one day, or if not published, at least made publicly accessible.

Most likely he would be proud then of the effort that Canberra researcher Bernadette Hince has gone to in distilling them into one fascinating and easy-to-read volume.

Unique & Unspoilt: A Year Among the Natural Wonders of Heard Island tells the story of a year that Béchervaise spent as officer in charge of the Australian base on this remote island near Antarctica.

Inhabited for only a few years between 1947 and 1955, Heard Island is a spectacular, huge ice-covered volcano and Béchervaise, who had led the first ascent of craggy Federation Peak in south-west Tasmania, was keen to climb the peak on Heard.

Leaving his wife and four young children behind, he enthusiastically embraced the opportunity, and his account presents a remarkable picture of optimism, resilience and diligence.

Hince has necessarily sifted out much of the dross – even in Antarctica, or the sub-Antarctic as Heard Island, strictly speaking, is – there is much that is mundane on a daily basis.

She admits that the book probably presents a misleading impression of the amount of action and frequency of journeys away from the station, but in doing so, she allows Béchervaise’s observations to focus on the beauty of the island, the tyranny of the climate and the nuances of the seasons.

Béchervaise kept an astonishing amount of paper during his lifetime – from programs and receipts to diaries, manuscripts and press clippings. The National Library holds 77 boxes of his papers.

That Hince has been able to distil the 275,000 words he wrote on Heard Island into some 200 pages deserves credit indeed.

Unique & Unspoilt: A Year Among the Natural Wonders of Heard Island is available through Fishpond with free postage anywhere in Australia.