For almost seven decades after it opened in 1928, the Peters Ice Cream Factory shaped the character of Brisbane’s West End. It provided employment, especially for many Greek migrants; it was the place where many friendships were formed; and it produced icecream – buckets and buckets of the stuff that Australians came to love. 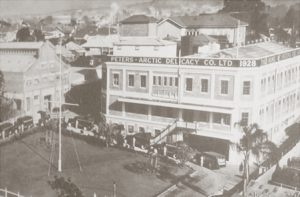 The factory closed in 1996 and although it’s been used for various purposes since, it was damaged by fire in 2013 and was looking rather unloved. The factory and warehouse are about to have their moment of glory again though. These heritage buildings will become the centrepiece of West Village, a new urban precinct with apartments, dining and entertainment venues, open spaces and parkland.

In the meantime, the space is being used for community events, and thus the idea for last weekend’s Icecream Festival was born. Project director Andrew Thompson said people were captivated by the idea. “It went viral on Facebook and 39,000 people registered,” he said. “So many people had forgotten it was an icecream factory.” In the end, the organisers had to restrict numbers, but those who were lucky enough to gain entry could take their pick of about 30 different icecream producers. Here we present a snapshot of some of those who sweetened the day.

Gelato Messina, a Sydney favourite due to open in Brisbane soon, was there with its Crack Monster, Robert Brownie Junior and other treats. Nitrogenie, Mister Fitz’s and Minus32 were there too, along with Boss Bites, Icecream Curls and the Doughnut Bar. Cowch Dessert Cocktail Bar had Naked Pops, chocolate covered popsicles with toppings such as M & Ms, Oreo’s and Tim Tams. We liked the look of Frozen Sunshine iceblocks, made on the Sunshine Coast using local and seasonal ingredients, but had just come from a big lunch (not a good idea before an icecream festival). These iceblocks contain no dairy, gluten, eggs, nuts, colours or preservatives, and they come in yummy flavours such as coconut and candied ginger, salted caramel, strawberries and cream, pink lemonade, and pear and cardamom. We managed a small tub of pistachio gelato from La Macelleria, a traditional Italian-style gelateria in Teneriffe, and enjoyed seeing all the happy faces as we wandered past classic old icecream ads and original machinery from the Peters factory. A cool event.