Enya’s chorus of Sail Away is being piped through the sound system as I nestle into an ultra-modern plastic contoured chaise lounge on the deck of the Haumana, a small, friendly ship that I have taken a liking to immediately. 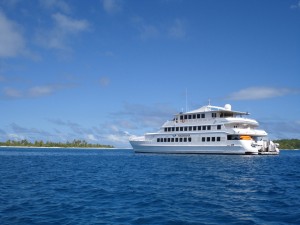 Storm clouds are brewing and the moon creates a silhouette of the motu (islet) in French Polynesia where we are scheduled to have dinner. But sadly it is not to be.

Despite the efforts of the crew who have been slaving away for hours to create a feast while we’ve been frolicking around in warm, tranquil waters, our dinner under the stars is called off.

In the end, the rain doesn’t eventuate but it is to the credit of the affable and obliging crew that we enjoy an equally magical evening on the ship’s deck. With 12 cabins, or 24 passengers when full, the Haumana offers a wonderfully personalised cruise in the waters of Rangiroa, the largest atoll in French Polynesia, and the second biggest in the world. An hour’s flight from Papeete, Rangiroa is 68km long and 23km wide – so big that it could contain the whole island of Tahiti. 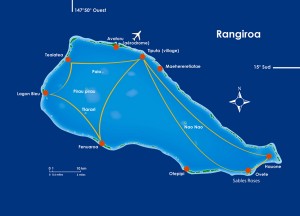 It was considered by the late Jacques Cousteau to be one of the richest atolls on earth, noted for its abundance of dolphins, sharks, manta rays and fish of every description.

Seen from the air, the reefs of French Polynesia are like necklaces around sparkling, emerald lagoons.

All are incredibly beautiful, but Rangiroa’s near-pristine environment and its miles of empty beaches set it apart from the better known islands of Moorea and Bora Bora.

It remains largely undiscovered by visitors, except for divers who know it as one of the world’s great diving spots. Activities director Yves Michel, who is French born but has spent most of his life in Tahiti, points out the Tiputa pass, famous amongst divers for its shark “wall”, a group of up to 200 sharks that frequent the current-rush where the lagoon meets the ocean.

Scuba diving can only be done from the Haumana by prior arrangement, but there is a magnificent natural aquarium near here where you can snorkel. Indeed, there are opportunities to snorkel every day on our four-night Pink Sand Cruise, and even a chance to swim with sharks near the pink sand beach that the cruise is named for. These are reef sharks, smaller than the monsters of the deep – but you wouldn’t want them any bigger, would you? The floating bar that the crew set up at the pink sand beach excites me as much as the beach itself, for it’s not quite as pink as I expected. What does enthral me is another islet inhabited only by booby birds. The privilege of seeing so many birds at such close range, fearless in their native habitat, is alone worth the trip to Tahiti. Another incredible experience is our visit to an islet of fossilised coral that has been sculpted over time to produce a lunar-like landscape. As the tide comes in, torrents of water rush in over the coral, creating waterfalls and whirlpools. The crystal clear water boasts hundreds of black beche de mer and tiny clams that open up to reveal a vivid green and black. We also visit a small motu inhabited by just one family who lead a Robinson Crusoe lifestyle. They allow us into their home, the corrugated iron walls and earthen floors decorated with an intriguing mix of brightly coloured cushions and curtains, straw mats, hats, soft toys and shell ornaments. The family’s only source of income comes from the shells they harvest and turn into jewellery. We spend an idyllic day on another islet, lazing on the beach, splashing in the water and going for walks while the crew cook lobsters over an open fire and fetch coconuts that they grate and squeeze into milk over the salads. As we enjoy lunch under a sprawling tamanu tree with waves lapping at the shore, our shy waitress Carol strums a ukulele and sings like an angel. All the entertainment throughout the cruise is provided by the crew, who develop an easy rapport with their guests and who bring a delightful Polynesian feel to the experience. The heavily tattooed Gustave knows Rangiroa like the back of his hand, and when he is not skippering the tender boat, he too picks up a guitar and sings hauntingly beautiful melodies.

On board the Haumana, the queen-bedded cabins have their own ensuites, and there is a restaurant, lounge and sun deck with jaccuzi for relaxing in. Although the ship is comfortable rather than luxurious, the food is definitely five-star, an exquisite blend of French-Polynesian that sums up beautifully this corner of the Pacific. This story was published in The Sunday Telegraph on August 17, 2008.