Icecream maker John Marshall likes playing around with flavours, so much so that he set up his own chemistry lab to create his own extracts. Since he established his business, Frugii, a few years ago, he has produced more than 100 flavours of icecream that he sells to some of Canberra’s leading restaurants.

Among the extracts he makes are cherry, ginger and licorice root. He makes his own vanilla extract using Tahitian or Madagascan vanilla beans, and sometimes even the vanilla beans that are now being grown in Queensland’s Daintree.

John welcomes us with a tall glass of banana icecream as we step into the fully equipped commercial kitchen that he has set up under his house at O’Malley. Made with fresh pureed banana, the icecream is topped with wickedly delicious dulce de leche, a Latin American condensed milk that is slowly heated till it turns to caramel. 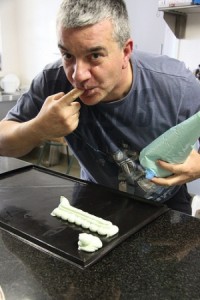 The kitchen still has the small domestic machine that he started off with, but now he also has an impressive array of some of the world’s best commercial equipment, including large churners that can make eight litres of icecream in eight minutes, two induction hobs and a refractometre to check the sugar level of fruit.

Wherever possible, he uses fresh fruit to make his icecream and sorbets. “If it’s out of season (and a chef requests a particular icecream), I’ve got no choice (but to use frozen). I have a big blast freezer which allows me to put some product away for when it’s out of season. If I can’t get something like cherries, I give the chef a choice. I can track down frozen ones or they can use something else.” 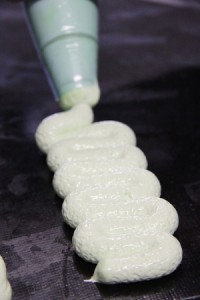 “Lemon juice, for example, changes from week to week. People don’t like a lemon sorbet that is too sweet. If the lemon juice is too sweet, you have to use different sugars. The lemons could be tart a few weeks later. I’m trying to work a recipe to suit the juice on the day. It depends as well on what the chef wants to put the lemon sorbet with. Because I’m trying to do top-end stuff, I’m showing seasonal variations and making the best of it.”

John has thoroughly researched every ingredient that goes into icecream. He says most people are unaware that there are a lot of different sugars, all of which have different sweetening powers and different freezing properties.

A passionate cook since the age of 12 when he was given a copy of Larousse Gastronomique, he started dabbling in icecream about seven years ago. “I was intrigued by it, and I love desserts. When I go to a restaurant, I check out the desserts so I can order the other dishes accordingly.”

Growing up in a council house in the West Midlands in England, it was unusual for boys to have cookbooks. “I still remember, I turned this book open and I saw this beautiful piece of bread. I made it and I thought, ‘this looks easy’.”

Although largely self-taught, John has done a number of courses in making icecream, as well as chocolates and cakes. These other creations have become a happy sideline to his icecream venture.

“When I ventured into finding all about chocolate, I got in contact with Kirsten Tibbles of www.savourschool.com.au.  She is a recognised expert of the pastry and chocolate field and has a school in Melbourne. I now attend around twice a year for two courses that are taught by high-end French pastry chefs. (They) keep me up to date with all the latest trends that are happening in Europe.” 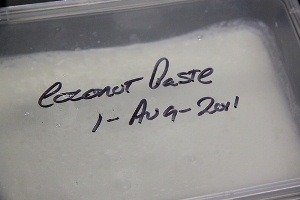 John uses the very best chocolate available, typically Callebaut Single Origin, Cocoa Barry, Valhrona, and “last but not least – the best in the world for the past three years, Amedei Chuao 70%.”

He enjoys experimenting for clients, and his small domestic icecream machine still comes in handy for when he is making an experimental batch.

Pulp Kitchen has his mango sorbet, pistachio and vodka icecream, and calvados brandy icecream on its menu, while the Shepherd’s Run cafe/cellar door at Wamboin has his gewürztraminer icecream. Cape Cod serves his green apple sorbet with smoked salmon for a delightfully different starter. Other venues that take his product include Hotel Realm and the Royal Canberra Golf Club.

John is not convinced that fat makes a good mouthfeel in icecream. “I don’t like too high a fat content. I like it more like a gelati. I like a lower fat because I think fat masks flavour. A lot of the milk I use is skim milk so I could in theory say it’s a low-fat icecream.”

His favourite flavour? “I haven’t got one. It depends on my mood.”