Mark Henry is a man on a mission. I first got to know him years ago when he launched his Füri knives onto the market. They’re still among my favourite knives and have really stood the test of time. Always an innovator, Mark has now created a cast iron pan, which he is launching via the crowdfunding site Kickstarter.com

If you pledge $99 towards the project, you’ll be rewarded with one of the Fonte ‘Tough Love’ pans, shipped free in Australia. This is the same price the pans will sell for when they are released onto the market, and you’ll have the added bonus that they will have “First Edition” and the casting date stamped on the bottom.

You’ll also have the satisfaction of knowing that you’ve helped get the project off the ground. But you’ll have to hurry as the Kickstarter appeal has a deadline of September 21. (I should stress here that this is NOT a sponsored post. I’m just happy to be spreading the word as I know Mark and admire his work.) 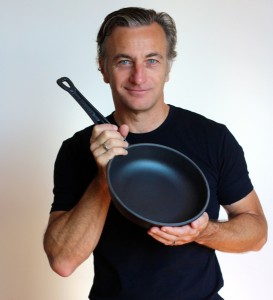 Mark is the founder and engineer behind the well-known Füri knives business, which he sold in 2008. After decades of making knives and equipment for chefs in Australia, the USA and France, and exporting them all around the world, he has turned to creating cast iron pans.

While living in the USA, he found it interesting to see that American cooks had a long tradition of using cast iron pans. In recent years, there has been a huge rebirth of interest in cast iron cooking there as people seek a more natural alternative to non-stick polymer coatings.

Mark hopes that with his innovative new version of old technology, Aussie cooks might also embrace the cast iron revival.

Mark wanted to keep “all the good stuff” and improve on the traditional weaknesses of cast iron cookware. “I wanted to retain the best natural properties of cast iron pans, like their even heating and high temperature searing ability, and their famous multi-century durability,” he said. “If you can trust the source of the iron they are also the safest material to cook on, with no non-stick chemicals, just natural oil seasoning.”

The Fonte ‘Tough Love’ pans have been given a graceful French shape like a Lyonnaise sauteuse pan. (It is said that rounded-walled pans best for the sauté toss originated in Lyon, France.

Although cute, the racy love handles of the Fonte ‘Tough Love’ pans, long ergonomic handles with heart-shaped palm pads, are not a gimmick. “They’re carefully engineered for more comfort, control and less heat transfer up the handle – for high performance for chefs. It was about time someone did something about those uncomfortable, hot, stubby little handles on cast iron pans.” For food safety, Mark wanted super-clean and trustworthy Australian cast iron. He is proudly manufacturing in Australia, even though he is under no illusion as to the inevitably higher cost. The only way to get hold of the Fonte pan initially will be through Kickstarter.com. Once the project is off the ground, the pans will be distributed through retail outlets. The Fonte pan is the first in a long line of innovations that Mark expects will come from his new company, Solidteknics.

“We have three very interesting patents pending for other kitchenware innovations, so if Kickstarter really works for Fonte Tough Love pans in Australia, we may launch the other new products in the same way,” Mark said.

Here’s a link to the Kickstarter appeal if you’d like to become involved.