“Perhaps we venture in search of wildlife for the simple joy of the wild, of seeing animals free and feral in their fast-disappearing natural habitats. To stand amongst millions of curious penguins and bellowing walruses on an Antarctic South Georgian beach in the densest concentration of animals on the planet is a humbling and thrilling sensation,” writes Samantha Wilson, in her introduction to Ultimate Wildlife Destinations. 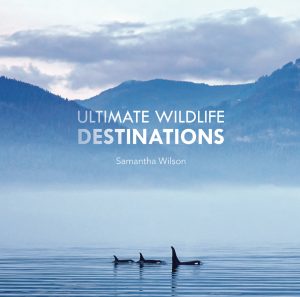 “Or perhaps it’s to see with your very own eyes some of the very last individuals of a species which may terrifyingly not exist in a few short years – just 700 gentle mountain gorillas and 5,000 black rhinos remain in the wild. But maybe it’s to challenge yourself, to glimpse the most elusive snow leopard in the harsh Himalayan foothills, or to set eyes on the ghostly white Kermode bear which ambles through Canada’s Great Bear Rainforest.”

Whatever your motivation in travelling to observe wildlife, Ultimate Wildlife Destinations is sure to resonate. The author, a member of the British Guild of Travel Writers, has journeyed from the Northern Lights of the Arctic to the wilds of Patagonia to the islands of Palau. She has railed through Europe, canoed the Swedish lakes, camel-trekked the North African deserts and travelled the length and breadth of South and Central America.

Born in the UK and raised in Mallorca by two globe-trotting parents, travel clearly comes as second nature to Wilson. Passionate about wildlife and the environment, she brings an observant eye, a wonderfully descriptive yet succinct writing style, and a thoughtfully curated collection of entries to the book.

The four Australian entries, for example, include the crocodiles of Kakadu National Park, the platypus of Queensland’s Eungella National Park, the kangaroos of Kangaroo Island, and the quokkas on Western Australia’s Rottnest Island, destinations chosen not just for their abundance of these odd creatures, but also for the remarkably easy wildlife-spotting opportunities they provide.

While African safaris might have lured early explorers to witness lions and elephants first hand, today’s travellers might be swimming with whale sharks in Honduras, tracking jaguars in Brazil, or hiking in Transylvania’s Carpathian Mountains in search of European brown bears. At the end of each of the 100 entries, Wilson provides a brief snapshot of how to get there and when the best time is to go, along with references for further information.

Of course, the appeal of any book like this lies in its pictures, and from the spectacular caribou migration in Nunavik, to the graceful red crowned crane in Hokkaido, to the pink dolphins in Bolivia, to the writhing red-sided garter snakes in Manitoba, the images in Ultimate Wildlife Destinations are stunning. Sourced mostly through Shutterstock, it seems a pity that the credits are carried in fine print only at the end of the book, and not alongside the photographers’ amazing work.

Buy if you need more fuel for your wanderlust and you like to travel wild.