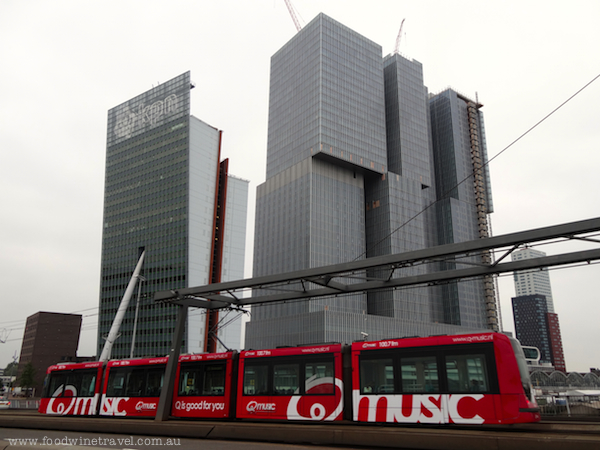 Not surprisingly, I’ve been thinking a lot today about my lovely dad and a trip I did a few months ago to Rotterdam, the city of his birth. When I attended Travel Bloggers Unite in The Netherlands in May, it meant more to me than a conference normally would. It’s now more than six years since my father died and a good 20 years or so since I visited Rotterdam. The fact that TBU was being held in Rotterdam, within walking distance of where dad (right) was born, was a good reason to take another look at the city where he spent the first few years of his life.

Little matter that the weather was crap. I had a great time exploring the city, and enjoyed an excellent walking tour courtesy of the program that TBU had organized in conjunction with the kind folk at Rotterdam Marketing.

Rotterdam is often called the architecture capital of The Netherlands, thanks to its distinctive modern buildings. Its streetscapes are worlds apart from the heritage façades of Amsterdam and The Hague, and some would argue that it lacks the charm of those cities.

I think it’s a cool city (and not just because of the weather!).  The story of why it’s so modern is a poignant one. On 14 May 1940, Rotterdam was so heavily blitzed by the German Luftwaffe that almost the entire historic city centre was destroyed. The bombs ignited oil tanks on the docks, causing fires that spread throughout the city. Nearly 1000 people were killed and nearly 30,000 homes were lost, including the one in Harddraverstraat where my father was born.

The house was just behind the railway station where my grandfather worked. (That’s my grandfather pictured at right: H C Verhoeven, Rotterdam Delftse Poort, 1928).

You can read more about my father and my grandfather, both mad keen train enthusiasts, on the website we maintain in dad’s memory.

Harddraverstraat still exists and during my trip in May, I took a nostalgic walk there. The houses were rebuilt after the war. On father’s day 2013, join me on a walk through Rotterdam as I raise a toast to a special dad. Take a look at this incredible footage of Rotterdam in the 1930s, not long after my father was born there: