This post is about neither food, nor wine, nor travel. But I’m feeling a little nostalgic so please allow me to indulge myself. We’ve just been to see The Seekers in concert on their 50th anniversary tour. 50 years in the music business – what a remarkable achievement.

Maurie bought me the tickets for my birthday. When The Seekers were dominating the charts, his diet was more the Rolling Stones and The Yardbirds. Since our musical tastes still diverge (although not as much as they once did), the fact that he is sitting with me in a Seekers concert must mean he is truly devoted to me, right?

Actually the demographic of the audience is more his age group than mine – by the time I was in my teens, The Seekers were a band that your mother was more likely to be listening to. But mine was a little different from other 1970s households.

For starters, we didn’t have TV. (Someone once said I’d make a great case study, being the only one in my cohort to have grown up without TV.) The outside world came to us via an enormous radio/gramophone and those being the days when kids did what they were told, my parents pretty much dictated what was played. 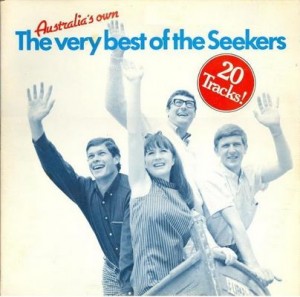 So, looking back on it now, there was rather a nice innocence about my first forays into pop music.

While rockin’ rollin’ ridin’ along with The Seekers the other night, my mind took me back to my early teens when my parents gave my older sister and I a record player. Our very own record player. It was a small vinyl box with a turntable on top and I don’t think it ever worked properly from the day we got it, but it was ours, it was portable and it helped shape my musical exploration.

With the record player came a Seekers record, and although my musical appetite has expanded considerably since then, I can still be found tapping my feet to A World Of Our Own, Georgy Girl, I’ll Never Find Another You and all their other tunes.

I think Judith Durham has an amazing voice and I love some of the work she went on to do as a solo artist. I also can’t get over the fact that The Seekers are just so damn nice. There’s been none of the ugly bust-ups or squabbles over money that other bands go through (or none that I’m aware of). Even this week on stage, the blokes were still lending a protective hand to Durham – how cool is that?

And of course it was one of The Seekers, Bruce Woodley, who co-wrote Australia’s unofficial anthem, I Am Australian, a song that all Aussies identify with, including as he so proudly points out, Australia’s first inhabitants.

I remember the first time I heard that song. It was at their 25th anniversary concert in the Royal Theatre in Canberra, the same venue where they played their 50th. The song was still so new that Woodley had to take a piece of paper out of his pocket to remember the words he had written. I can remember thinking, “Wow, that song’s going to be a hit.”

The 25th anniversary concert was much more polished than their 50th (oh well, none of us are in the same shape we were then!) But it was such a joy to once again share their journey, to see their old footage and to join in some of their laughs. There was footage of them in front of a still unfinished Opera House. There they were too at Wembley Arena in 1965, playing alongside The Rolling Stones and the Beatles, when a young John Lennon said to The Seekers’ manager that they were “not a bad little band, but everyone is here to see us”.

Keith Potger reminisced about an occasion when he was playing Morningtown Ride and a young boy eyeballed him and asked him why he was playing a Wiggles song.

We (Maurie & I, it didn’t seem to register with anyone else) also had a few laughs about the names of the blokes in their backing band: David Hicks, David Cameron and Graeme Press (did he dip out, or what?)

I learnt a few things I didn’t know: that Olive Tree, one of my all-time favourite songs, was specially written for Durham, and that Red Rubber Ball, a huge hit for The Cyrkle, was written by Woodley in collaboration with Paul Simon.

I felt very wistful thinking back to the time when The Seekers entered my life. Like all young kids, I could never have imagined where my life would take me, the trials and tribulations I would have to endure, or the joys I would be blessed with.

Yet music provides a wonderful continuity, for here is this group still singing their hearts out, still pulling the crowds, still looking so damn nice.

Keith, Bruce, Judith and Athol, thanks for all the memories.

Though the carnival is over
I will love you till I die….