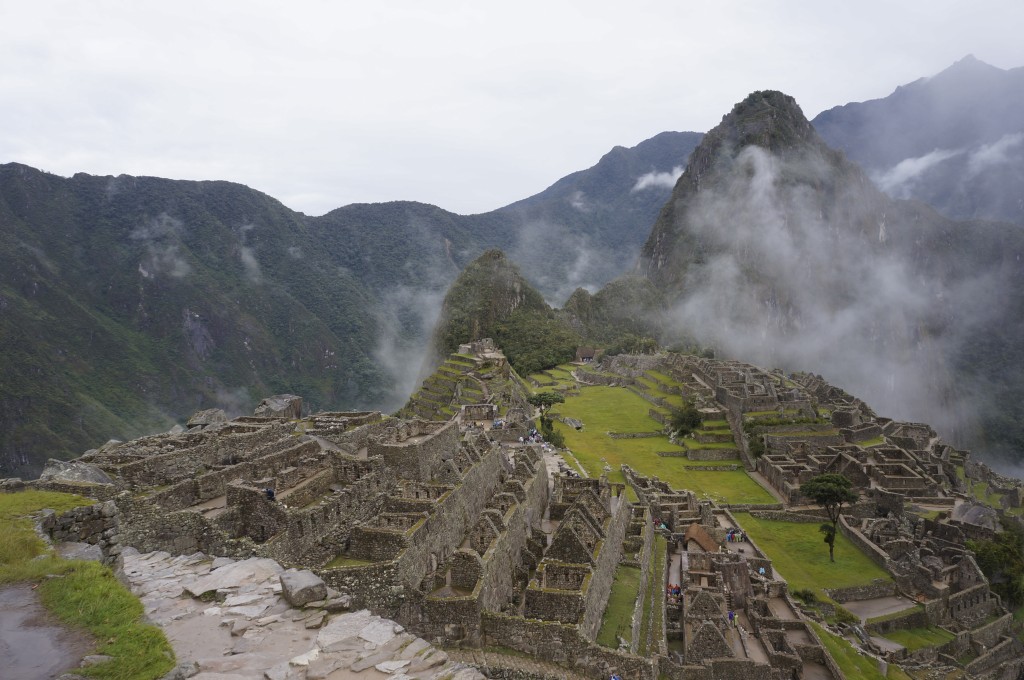 Machu Picchu and the Inca Trail have always been on my bucket list, and I was lucky enough to tick these off on a recent trip to Peru. For those of you hoping to do the Inca Trail one day, I can’t recommend it highly enough. Trekking 42 kilometres over 4 days, the Inca Trail is truly spectacular. Not only do you cover parts of the original trail built by the Incas, but you pass a number of other ruins, spend 4 days surrounded by the breathtaking and ever changing scenery of the Andes … oh, and you also visit one of the wonders of the world. Despite the heavy downpour on Day 2, some pretty sore knees on Day 2, and a couple of tears along the way, trekking the Inca Trail was a great experience. The first day of the trek is relatively easy in comparison to the days to come, and the campsite has a little store where trekkers can buy a beer to celebrate completing the first 12km. There’s plenty of downtime on the first afternoon, which is good because Day 2 is said to be the hardest day of the trek. I’m not a big camper, but this first campsite of the trek would have to have been my favourite of the three nights – it was very picturesque, and the sounds of the flowing River Cusichaca made it a bit easier to fall asleep on a thin sleeping mat. Day 2 is said to be the hardest day of the trek because we have to make it to the highest point on the trail – 4200m above sea level. This point on the trail is called Dead Woman’s Pass, apparently because the terrain looks like a woman lying on her back. I have my own theories about where this name came from though, as I definitely felt like a dead woman by the time I got there.

Despite the huff and puff of getting to Dead Woman’s Pass, I found the following 2 kilometres to the campsite to be the hardest. The steep descent from this point is not easy on the knees. It is safe to say that falling asleep on night 2 is pretty easy, regardless of how thin the sleeping mat is. The third day of the trek is the longest and probably hardest on the knees, but definitely the most spectacular. Trekking through a cloud forest, the rocks are covered in moss with beautiful orchids growing on them, there are caves tunneled through the walls of the mountains, and some very impressive ruins. There is no doubt that the trek is physically and mentally challenging, but it is such a beautiful journey. Once you spot Machu Picchu from the Sun Gate on Day 4, the sore legs and nights of camping are totally worth it. Machu Picchu was more amazing than I ever could have imagined. The Incan site was bigger than I expected. With around 200 buildings in agricultural, urban and religious areas, there is plenty to explore. The most fascinating thing about Machu Picchu though is the history, or mystery, behind it as there is still no certainty about what it was, what it was used for, and who really discovered it. Our friendly guides, Manny and Darwin, knew everything there is to know about the Incas, the trail, and Machu Picchu itself. The chef was incredible. I was amazed at what they could whip up considering that all the food had to be carried with us, and they were cooking in a tent! Every meal was a 3 course meal, of very high quality, and plenty of food to keep you nourished for the hours of walking every day.

You need to book through a licensed tour operator to do the Inca Trail, and only 500 permits per day are issued so it is important to plan in advance. There are a myriad of trekking companies out there, but we went with Peru Treks and the service was second to none. We chose this company based on recommendations from friends who have trekked with them, but also because they are well known for good treatment of their porters – something that should be considered when booking your trek. If you’re not that way inclined, it is possible to catch a train from Cusco or Ollantaytambo to Aguas Calientes (the nearest town to Machu Picchu), with buses to Machu Picchu from there. One of the advantages of catching the train rather than doing the trek, is the energy for exploring that you’ll have when you get there – the trekkers fade pretty quickly by the time they get to Machu Picchu and probably don’t spend as much time appreciating the ruins as other tourists do.

If you’re planning on visiting (or even if you’re just dreaming about it), Turn Right at Machu Picchu by Mark Adams is a fantastic read to give you an idea of the mystery and controversy surrounding the amazing site. Regardless of how you get there, Machu Picchu and the Inca Trail are a fascinating testament to the Incan civilisation.