With the Qantas Business Class service to Perth, your Margaret River experience begins before you even arrive in Western Australia. WA wine royalty Vanya Cullen is one of the esteemed members of the panel who select the wine served on board, and not surprisingly, Margaret River wines are among the choice picks.

I recently had the privilege of experiencing Qantas’s flatbed east-west service between Sydney and Perth, en route to Margaret River. Everything about the service was great, from the Qantas Inflight Wine Program to the international dining standard featuring leading chef Neil Perry’s expert involvement.

The business class experience begins with access to the Qantas Business Lounge in Sydney and, on your return, the newly refurbished Qantas Club at Perth airport. The lounge has a fresh juice station, barista and gourmet food options, as well as plenty of reading material in the form of daily newspapers and magazines, computers, printers, high speed Wi-Fi and boardroom and meeting room facilities.

Once you’re feeling energized and ready to board, head to the gate. Don’t worry about the queue — skip the line and join the premium-boarding lane. Once on board, find your seat and sit back and relax. By now, the crew will have offered you a drink. Sure, take the bubbles! You’re in business! 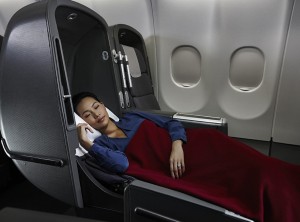 You won’t find anything but top-notch service here at the pointy end. On selected A330 aircrafts like the one I flew on, you’ll have your own Skybed (photo at right supplied by Qantas).

With a fluffy pillow and warm blanket, it can be fully reclined to a flat position. If you need to work, there are USB ports and in-seat power.

The in-seat entertainment system on the A330 offers world-class entertainment on individual 10.6” screens. Whether you’re Keeping Up With The Kardashians or laughing along with Phil Dunfy on Modern Family, settle in with a world of entertainment at your fingertips. On other flights, you’ll find iPads in the seat pocket with more than 200 hours of on-demand entertainment.

Is it lunchtime yet? Neil Perry has brought his Asian culinary persuasion to the menu on board. There’s a selection of small plates and mains, plus sweets or fruit, and a cheese platter. Qantas has an expert selection panel for its Inflight Wine Program. Tom Carson, chief winemaker and general manager of the highly regarded Yabby Lake and Heathcote Estate, heads the panel which also includes Vanya Cullen, from a prominent Margaret River winemaking family, and Stephen Pannell, whose parents played a major role in putting the Margaret River region on the map.