It’s fitting that a book about almonds should be published by Wakefield Press, an excellent independent publisher in South Australia, for there was a time when 90% of Australia’s almond crop came from Willunga in South Australia.

The proliferation of almond trees on the Fleurieu Peninsula is no more – these days most of the trees have given way to vineyards – but a handful of commercial producers remain and they still grow wonderful almonds.

And the association between Willunga and almonds remains strong, with chefs embracing it in their local cuisine and the beauty of the almond trees in blossom still feted every year, even though there aren’t the masses of blooms there once were.

Helen Bennetts and her husband bought a small property in Willunga nearly 20 years ago. It had about 60 old almond trees on it, and it piqued Helen’s interest to start learning about almonds and collecting recipes. All of the knowledge she has acquired has been distilled into Willunga Almonds: Stories + Recipes, a lovely book that celebrates the heritage of this modest kernel.

It is thought that almonds were originally cultivated in the eastern Mediterranean about 4000 years ago, making it one of the earliest domesticated crops. The book is beautifully illustrated with many historic paintings and photographs.

How dukkah took off in Australia

The recipes also reflect this long history, as many of the dishes originated in countries around the Mediterranean and the Middle East where almonds have been growing for thousands of years. They also reflect the influence of the almond’s history as cooked in South Australian home kitchens with produce from the Fleurieu Peninsula: grapes, wine, olives, oil and seasonal fruit and vegetables.

The recipe I have chosen to feature here is particularly appropriate because it also has a long association with South Australia. I remember visiting South Australia decades ago when just about every restaurant had dukkah on the table. The trend was quickly picked up in the eastern states and now it’s a rare Aussie who isn’t familiar with this mixture of roasted nuts, herbs and spices eaten on bread dipped in olive oil.

There’s an interesting story to how dukkah took off in Australia. Claudia Roden introduced the English-speaking world to this Egyptian specialty in A Book of Middle Eastern Food, published in 1968. Tradition has it that dukkah featured at a special 1993 International Olive Oil Council luncheon held in McLaren Vale at the Salopian Inn and from there became a regular part of the local cuisine.

Some years later Roden visited the area during the Tasting Australia festival and was delighted to discover the local version featuring almonds and fennel.

Serve dukkah with a small bowl of extra virgin olive oil and good bread. You can vary the spices and add dried mint, thyme or other herbs to taste. I often sprinkle it on fish and chicken, as it makes a nice easy coating. 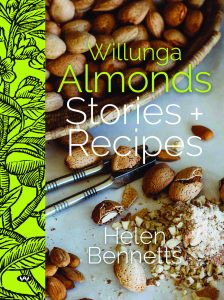 Roast all ingredients separately then pound together roughly in a mortar.
Store in sealed container in a cool, dry place.

Recipe and images from Willunga Almonds: Stories + Recipes, by Helen Bennetts, published by Wakefield Press, and reproduced with their permission.