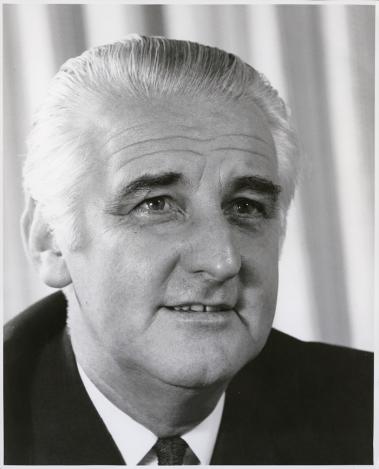 Hector Crawford’s production company was responsible for some of the most popular Australian television dramas of the 1970s and 80s, including The Sullivans, All the Rivers Run, Homicide, Matlock Police, Division 4 and Cop Shop.

2013 marks the centenary of Crawford’s birth and to commemorate, the National Film and Sound Archive is publishing episodes from some of his productions online.

Crawford, who died in 1991, is a legend of Australia’s music, radio and television industry. He was instrumental in the introduction of an Australian content quota for commercial television, was awarded a CBE in 1980 for service to the Arts, and in 1984 was the first winner of the TV Week Hall of Fame Logie Award.

NFSA’s television curator Helen Tully said Crawford was an entertainer, musician, entrepreneur and salesman extraordinaire who possessed a huge passion for all things Australian. “He believed that our broadcast waves should resonate with our own voices and with product produced by Australians,” she said.

Hector Crawford Productions was formed in partnership with Hector’s older sister, Dorothy Muriel Turner Crawford. Together they produced many of Australia’s most fondly remembered radio productions during its golden age, including the serials The Melba Story, D24 and Inspector West, which ran for 728 episodes in the 1950s.

By 1952, Dorothy and Hector began preparing for the introduction of television in 1956. Their renamed company, Crawford Productions, was one of the few to successfully make the transition from radio to television, although it wasn’t easy at the start. Hector had to mortgage his home and he and Dorothy went without salaries for a year.

Full episodes of crime drama D24 (based on the files from the Victorian Police Force) and Rogues Gallery (dramatising the life of bushranger Captain Moonlite), as well as a comprehensive profile of Crawford, are available on the NFSA website.

Award-winning episodes from the police series Homicide, Division 4, Matlock Police and Cop Shop can be viewed on-demand at the Australian Mediatheque in Melbourne.