A commercial traveller is nearly run off a country road outside Manchester by a gang of thieves making their getaway after dumping the body of a girl who had unfortunately been chained to a bookmaker’s satchel containing cash that she was on her way to bank for her employer.  The commercial traveller stops to investigate and is horrified to discover that the girl is dead.  He jumps back in his car and heads back down the road to a convenient phone box to call the police.

It’s at this point that a flash of recognition hits me and I say to myself, “My God! That’s Warren Mitchell who has just parted from the dead.” It wasn’t his first movie role, but this early bit part was just one more fascinating addition to the array of British actors that took to the screen for the 1960 production of Hell is a City, showing at Arc Cinema as part of the Rainy Sundays, Stormy Mondays: British Film Noir festival. 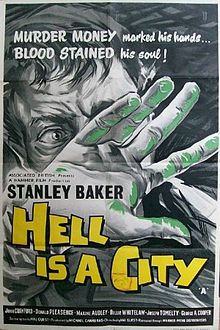 The fabulous Art Deco style Arc Cinema is located at the National Film and Sound Archives (NFSA) in the grounds of the Australian National University and is one of the lesser-known jewels of Canberra.

The original building dates from 1930 and was previously the Australian Institute of Anatomy.  The NFSA includes a shop, a café, a gallery and a theatrette in addition to the Arc Cinema.

The shop offers a big range of movie DVDs and music CDs as well as memorabilia and other items.  The gallery contains a fascinating exhibition covering the history of Australian cinema and television, with costumes, props and sets.

One of the NFSA’s best features is the enclosed courtyard where you can enjoy a coffee and a snack and which is the venue for outdoor screenings on summer evenings.  I had turned up for my dose of British Noir on a warm winter’s Saturday afternoon in Canberra (17 degrees) and the leafy courtyard was bathed in sunshine.  The ideal place for a pre-movie coffee and catch up on the latest movie magazines and entertainment guides – heaven! On that day, the only body left in the old Institute of Anatomy building was the one that Warren Mitchell had just found and the hunt for the culprits was under way led by the hard-headed Police Inspector Harry Martineau, played by Stanley Baker.  The rest of the cast for Hell is a City included John Crawford, Donald Pleasence, Billie Whitelaw and Vanda Godsell, under the direction of Val Guest, who also wrote the screenplay from a Maurice Proctor novel.

The action moves along at a great pace, which is not unusual for British Noir, although not what you might expect judging from other British movies of the time. That pace is helped along by a hard-edge jazz soundtrack by Stanley Black, who was one of Britain’s best known bandleaders and composed the music for over 200 films in England and America.  Among others, Black composed the music for Cliff Richard’s  Summer Holiday.

One of the most fascinating scenes in this film is an illegal game of two-up held in a quarry where some of the gang go to gamble their ill-gotten gains.  Martineau and Manchester’s finest raid the game having already worked out that it may be where some of the marked money from the robbery will end up.  It looks like the extras attending the game are locals who probably do this every week anyway and when the cops turn up are simply trying to scamper off to their own homes. 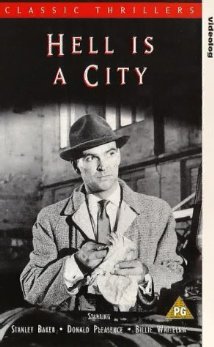 As Martineau, Stanley Baker is a cop who has seen it all and can’t be bought.  He demonstrates an uncanny understanding of the criminal mind and especially his nemeses, John Crawford’s character Don Starling, who organised the robbery with his old gang to finance skipping the country after breaking out of gaol and killing a prison guard on the way.

The thing Martineau can’t work out is his relationship with his wife who waits while her husband’s marriage to the job overtakes her own.   The local barmaid however is only too keen to hook up with Martineau at any time and not too shy to let him know. He’s tempted but he keeps reminding her that he’s married, although that fact doesn’t get him home on time.

At the end of the movie, Martineau is wandering the streets of Manchester and although he has brought the villains to justice he is still a troubled soul and still not reconciled with his wife.  He encounters Lucky the barmaid waiting for a bus and, making another play for him, she says: “You know where to find me anytime.”

Demonstrating a degree of moral fibre that only Manchester detectives can muster, he again reminds her that he’s married, adding that she might miss her bus.  Lucky replies: “I think I already have.”  With that irony, Martineau fades into the night lights of the city and British Noir history.

For those of you who want to see Hell is a City and some more British Noir, Rainy Sundays and Stormy Mondays will be part of the upcoming Sydney Film Festival.  This is a genre that is well worth a look.  For that matter so is Arc Cinema – a bit of heaven in Canberra.