In a city that is rushing head first into the 21st century, it’s refreshing to see an old building re-purposed rather than demolished. The building that houses Hong Kong’s stunning new hotel, The Murray, has been a landmark in the heart of the city since 1969.

Home to government offices for nearly half a century, this icon of modernist architecture has borne witness to the transformation of the city’s skyline and identity from a British colony to a Special Administrative Region of China.

Designed by British architect Ron Phillips, The Murray was a striking building from the start, with recessed windows oriented to allow abundant daylight without direct heat from the morning sun. This architectural feature won awards for its ground-breaking and energy-efficient design, remarkable for a building of its era.

In 2013, the Hong Kong Government introduced an initiative to conserve the heritage of Central Hong Kong, and The Murray was one of the properties slated for redevelopment. The transformation of a former police headquarters compound into a world-class heritage and arts hub is another success story under the same initiative.

That project, now known as Tai Kwun – Centre for Heritage and Arts, opened a few months ago and is within walking distance of The Murray. We visited it during our stay at The Murray and found enough to keep us occupied there for hours (including a very cool bar in the old jail cells).

But back to the Murray Hotel, part of the Wharf Group’s luxury hotel brand, Niccolo Hotels. On winning the government tender, the Wharf Group mandated renowned architectural design and engineering firm, Foster + Partners, to convert the Murray Building into a 25-storey, 336-room luxury hotel.

As part of the deal, they had to retain the external walls and features, including the building’s signature lower arches and a graceful old tree that stands near the entrance. This “Old and Valuable Tree” even has a beer named after it – a beer that is brewed especially for the hotel and which we had the privilege of tasting in the hotel’s very cool rooftop bar.

Many of the building’s interesting lines and angles were dictated by its original design – the lofty ceiling of the light-filled lobby, for example, has an intriguing slope – because it was formerly a ramp of the office carpark. It creates a dramatic sense of arrival that carries through to the restaurants on the Garden Level.

Ron Phillips couldn’t be more pleased with the building’s salvation and transformation, by all accounts. The now 90-year-old architect and his family were the hotel’s first guests and I’m told that he nearly cried on seeing how it had been brought back to life. “To see my original design being fully preserved … is most rewarding and something I could never have imagined,” he said.

Standing prominently between Garden Road and Cotton Tree Drive in the heart of Hong Kong, the hotel offers some of the city’s most memorable dining and hospitality experiences, making it a drawcard for people working in the Central Financial District. The five elegant dining destinations include a glamorous rooftop restaurant and bar, Popinjays, with panoramic views.

We enjoyed cocktails and tapas here, along with half a dozen Gillardeau oysters, the “Rolls Royce” of oysters from France (definitely amongst the plumpest, most flavoursome we’ve ever tasted). With fun and lively artworks on the walls, gorgeous fresh flowers and lots of colour, the ambience is cosmopolitan and vibrant, and it’s a great spot to sit and watch the city come to life by night. There’s also another bar, Murray Lane, adjacent to the lobby.

Breakfast in the Garden Lounge is one of the best hotel breakfasts we’ve experienced, with an enormous selection of western and Asian food on the buffet, and a menu of hot dishes cooked to order. In all our travels, we’ve never seen an unlimited supply of plump, juicy raspberries on the breakfast buffet like we did here. There was also a good selection of fresh juices, beautiful pastry items, smoked fish and cold cuts.

Also at Garden Level is The Tai Pan, which has an extensive international menu. Afternoon tea at the hotel has become so popular that it often needs to be booked months ahead. The atmosphere throughout all the venues is relaxed yet refined. Guo Fu Lou, which offers fine Cantonese dining, is in a stand-alone pavilion that was added during the building’s renovation but is very much in keeping with the existing design.

The hotel’s facilities are impressive to say the least, from state-of-the-art fitness facilities to the pool (not yet open at the time of writing, but it will be soon) to the 5 well-appointed spa suites. There are double suites for couples’ treatments, and lots of activities on offer, from outdoor boot-camps to yoga and tai chi sessions. The hotel will create bespoke fitness programs and spa treatments on request.

We loved the artworks throughout the hotel, both in the public spaces and in our room. Bold, eye-catching, quirky, they really made a statement against the muted grey and black tones of the décor. Floor to ceiling windows in the guest rooms offer vistas of either the green oasis of Hong Kong Park or the urban cityscape. Our room looked down on St John’s Cathedral, with office and apartment blocks towering behind it.

One of the things we really loved about The Murray is how beautifully appointed the rooms are. The bathrooms are sumptuous with beautiful tubs for soaking in, marble walls, gold shower and tap fittings, and a toilet with all the bells and whistles including a heated toilet seat. How on earth did the toilet know to lift the lid as we entered the room? We never did work that out. At the flick of a switch, the bathroom’s glass door magically changes from transparent to translucent. Bathrooms are stocked with Grown Alchemist toiletries, a beautiful Australian product. This is the only hotel in Hong Kong where you’ll find these.

All rooms have complimentary high-speed Wi-Fi and Smart TVs, spacious wardrobes, personal bar stocked with quality snacks and drinks, and bedside lighting controls. We could raise the blinds without getting out of bed, and there were dual blinds so that you could have a light screen or full blockout. There was a coffee machine (pods) and the most gorgeous set of four ceramic cups, each one depicting a different season. I think if the hotel sold these it would make a small fortune. I, for one, would have bought a set.

Our room had a lounge area and separate study space, and all in all, offered a level of comfort that was beyond 5 star. More than 75% of the guest rooms are 50 square metres or more. Explorer Suites, between the 19th and 22nd floors, are 75 square metres while the suites on the 23rd floor are grander still. The 125 square metre Penthouse Suite and 225 square metre Murray Suite are urban chic, with incredible views and the finest of creature comforts for well-heeled travellers seeking a luxurious getaway.

It is testament to Ron Phillips’ original design and the skill of the Foster + Partners design team that an office block could be given new life with such style and grace. 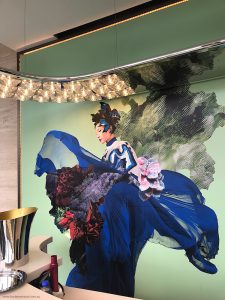 With thanks to The Murray Hotel for very generously hosting our stay for two nights. It was a pleasure to stay in this beautiful hotel.