Winter? What winter? I’m lucky enough to live in Queensland’s beautiful Moreton Bay region where the days have been gloriously sunny and the temperatures have been hovering around 23 degrees. It really is a winter paradise. About 45 minutes up the road from where I live, just before the bridge to Bribie Island, is the Sandstone Point Hotel. It’s right on the waterfront, overlooking the Pumicestone Passage and Moreton Bay. 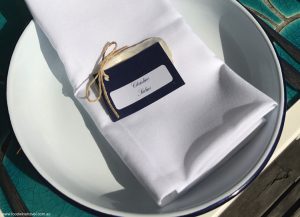 Yesterday I enjoyed a fantastic seafood lunch there, courtesy of the folk from Brisbane Marketing. Their special guest was Paul West, presenter of the River Cottage Australia series on TV’s Lifestyle Channel and soon to be screened free-to-air on SBS.

West will be the ambassador for the Moreton Bay Region at Regional Flavours, the fabulous event in Brisbane’s South Bank Parklands that celebrates the fantastic food, wine and craft beer produced in the greater Brisbane region. This year’s Regional Flavours will be held on the weekend of July 15-16.

West will do two demonstrations at Regional Flavours, one on the Queensland Taste stage and one on the main stage in the South Bank Piazza, both showcasing freshly caught seafood.

Sandstone Point Hotel will operate a Flavours of Moreton Bay pop-up restaurant on Little Stanley Street, with a menu designed in consultation with West. Patrons will be able to buy seafood meals for lunch and early dinner on both days of the festival. The menus haven’t been announced yet, but I’m told they will definitely include Moreton Bay bugs.

As regular Food Wine Travel readers probably know, bugs are my favourite seafood, so you can imagine that I was in seventh heaven yesterday when West tossed a few on the barbie yesterday for a taste of what we can expect from Regional Flavours.

Yesterday’s lunch was held down near the water, at the Oyster Shed in the grounds of the Sandstone Point Hotel. It’s a genuine old oyster shed that has been beautifully restored and now serves fresh seafood, including oysters, bugs, crabs and prawns. 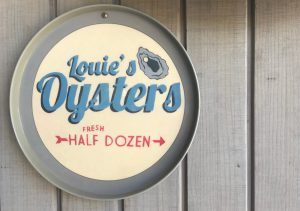 The shed was built in 1875 by James Clark, who was renowned as the “Oyster King”. At the peak of his operations in the 1900s, he owned more than 30 dredging sections in the area and employed more than 25 families, which was unheard of at the time.

The oyster shed revives some of this remarkable history and it’s a simply beautiful spot to enjoy fish and chips, fresh seafood or, during the warmer months, an amazing seafood banquet. It’s the perfect way to enjoy an afternoon on the bay.

And note: the desserts are pretty amazing too. I enjoyed a slice of lemon cake, which was deliciously light, but a couple of my colleagues were stumped by the stupendous Belgian waffles.