The National Wine Show is considered to be the “grand final” of Australian wine shows and this year’s was particularly momentous for a number of reasons.

For one, it was only the second time in the show’s 34-year history that a Riesling has been awarded the top gong. The Len Evans Memorial Trophy for Best Table Wine went to Jim Barry Wines 2012 The Lodge Hill Dry Riesling.

In a nice twist to the story, this Clare Valley winemaker won the trophy for best white wine at the National Wine Show 23 years ago. And as you can see from the black and white photo from that time, the award then was presented by the late great Len Evans himself.

“23 years is a long time between drinks but it is all worth it having our Riesling named the best wine in Australia, against such prestigious competition,” said Peter Barry on collecting this year’s award (pictured). Sponsored by Dan Murphy’s, the 2012 National Wine Show was held in the Great Hall at Parliament House in Canberra.

Anyone who has been to a function here will know what an impressive venue it is – it certainly provides a sense of glamour and grandeur to the occasion. MC Stuart Gregor was in fine form – erudite and naughty with his commentary. Even James Halliday, doyenne of wine writers, was a target as Gregor commented that Halliday was taking “Movember a little higher” (a reference to Halliday’s bushy eyebrows).

There was an enthusiastic ovation for pioneering Canberra winemaker, Dr Edgar Riek, who has been involved with the National Wine Show since the beginning. And there was much praise when local talent, Nick Spencer, scooped a trophy for his Eden Road Wines 2010 The Long Road Shiraz. Great to see a Canberra wine among the line-up.

Chair of judges this year was Steve Pannell, of S.C. Pannell Wines, who oversaw the judging of 1387 wines. At the end of this post you’ll see the trophies he and his team awarded – the wins were dominated by South Australia (11), followed by New South Wales (7),  Victoria (5), Western Australia (3) and Tasmania (1).

A new innovation this year was the opportunity for the two international judges to make their own awards. Swedish judge David Jean awarded his to Innocent Bystander 2011 Mea Culpa Shiraz, while Tokyo-based Ned Goodwin awarded his to Logan Wines 2012 Weemala Riesling.

The contrast between the off-dry Weemala Riesling, from Orange NSW, and the Jim Barry could hardly be more marked. Peter Barry, whose father Jim planted the Lodge Hill Vineyard in South Australia’s Clare Valley in 1979, said their success was all about the location and elevation.

“At 480 metres above sea level, it is one of the highest altitude vineyards in Clare and also one of the windiest,” he said. “In summer the winds blow the heat out of the soil and bring the grape temperatures down. This creates elegant red wines and white wines with excellent acid structure and longevity.”

The Barry family is particularly excited because this is the top award it has ever won. It’s also the first time a Clare Valley wine has won the top award in the National Wine Show, a reflection perhaps of the outstanding vintage the region has experienced. 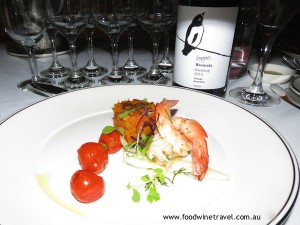 The National Wine Show dinner is always a great opportunity to taste some of the medal-winning wines and at our table we were privileged to have the Gralyn Reserve Chardonnay (wild ferment in French oak) and the Coldstream Hills 2011 Roslyn Vineyard Limited Release Pinot Noir (Coal River Valley, Tasmania).

I enjoyed re-visiting the Rosemount Estate GSM, a wine that was always a favourite but which I haven’t sampled for many years now. It last collected a trophy in 1989 and it was good to see it back in the fold, collecting the trophy for Best Blended Dry Red – Premium Classes.

Tony Brandtman, the national sales and marketing manager for Watershed Wines in Margaret River, was seated at the same table as me, so there was lots of applause when he was invited to the stage to collect the Cabernet Sauvignon trophy for Watershed’s 2010 Awakening, which we had just been sampling.

One of the highlights of the night was the trophy-winning 2008 Cookoothama Botrytis Semillon, a dessert wine that just keeps getting better and better. With a recommended price of $22.95, Aussie stickies like this are such amazingly good value.