We stood on the steps outside TriBeCa in Porto watching the rain pelt down and wondering how we’d get back to our hotel without getting drenched.  We’d been listening to some very cool notes in Porto’s hip jazz bar and restaurant.  A guy on the steps turned to face me and announced laconically, “A hard rain’s a-gonna fall”.

“There’s more to that statement than just the weather,” I thought.

Portugal has been one of the most severely hit countries in Europe by the financial crisis and along with Spain, Ireland, Greece and now Cyprus, received an €80 billion bail-out package in 2010. 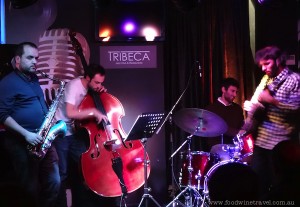 Since then, they have experienced increased taxes, government spending cuts and wage and salary cuts. The unemployment rate last year was 15% or one million people and the minimum wage is the equivalent of just over $A150 a week.

More tax increases and spending cuts are on the way.

The Portuguese are protesting against these cuts and austerity measures through street art and some quirky public opposition, inspired in Porto by the White Revolution Movement.  They like to tell the government to “look at itself”.  But they also have other ways of dealing with hardship.

In the same way that African Americans sang the Blues, in Portugal they sing Fado.  It’s said that Fado is a musical expression for the people’s soul and a way of coming to terms with their fate. As a form of music, it is said to have originated around the early 1800’s and is uniquely Portuguese.  Its most famous exponent was the legendary Amália Rodrigues, who was to Portugal what Edith Piaf was to France.  The way Fado is played varies from place to place and there are distinct styles in Lisbon, Porto and Coimbra.

Fado is also evolving. One of its modern exponents is Mariza, who fuses Fado with other music genres.

There are Fado clubs and venues throughout Portugal and in Lisbon we spent a very entertaining night at Chapito, a cultural centre where a variety of artists performed impromptu but directly from the soul.

The Portuguese guitar is central to Fado.  There is a Lisboa and a Coimbra version of this 12-string instrument with its soulful and evocative tones. In Faro, we were treated to a 30-minute recital of the Portuguese guitar by the very passionate and talented João Cuña (pictured above).  We found his Galeria on the waterfront after wandering around a series of backstreets adorned by washing and cats sunning themselves. Like the Portuguese economy, Faro is slow and rundown, but João Cuña, in his Gypsy scarf and hat, gave it life, vibrancy and personality.  He played and showed a series of video material about the guitar, its history and its greatest exponents.  We left with a CD, a taste for Fado and a feeling that we had had a glimpse of “the people’s soul”. 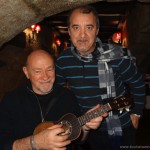 Back on the steps of TriBeCa in Porto, the rain was still falling and Oscar (no, it wasn’t Bob Dylan) offered us a lift back to our hotel.

He told us he was a musician who played at one of the restaurants along the Douro River and that he had some Fado numbers in his repertoire.

Two nights later, we were the only customers in Restaurant Mercearia and Oscar’s exclusive audience.  That didn’t dampen his and the waiter’s friendliness and enthusiasm.

Decades of dictatorship that ended in 1974 sparked a new beginning for Portugal, but the fate of the Portuguese people is now tied up in economic forces over which they have little control.  Despite this, Oscar and many of his countrymen are optimistic.  They can sing the pain through Fado, keep telling the government to “look at itself” and hopefully, that rain will soften. We travelled in Spain and Portugal with Railbookers, a holiday/tour operator specialising in tailor-made itineraries for the independent traveller across Europe.  Visit: www.railbookers.com.au or phone 1300 938 534. 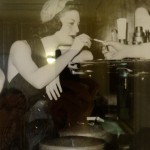 In Porto, we stayed in a quaint little attic room in the Hotel da Bolsa.   In Lisbon, we stayed in the charming and very unique Hotel Britania, where Fado singer Amália Rodrigues also once stayed. A photo from her visit takes pride of place in the hotel lounge.

Both hotels were booked through Railbookers.

Related post: The Train In Spain Is Better Than The Plane.