The Grace Hotel has a most appropriate name, as this five-star hotel in downtown Sydney exudes a lot of grace and charm. Entering the hotel is like stepping back into a bygone era, but once you leave the beautiful Art Deco foyer, the guest rooms are spacious, modern and completely luxurious.

The building housing the hotel was built by Grace Brothers in the 1920s as a showpiece of their successful retail business. The first two storeys housed their department store and the floors above it were intended as office accommodation for importers and other firms in the softgoods trade. (Photo above and below supplied.) Inspired by the neo-Gothic Tribune Tower in Chicago, headquarters of the Chicago Tribune, it was, and still is, an incredibly striking building with innovations and facilities that were state-of-the-art for the time.

During World War 2, the building was the Sydney headquarters of the U.S. armed forces under General Douglas MacArthur, and after the war, continued to be used for government purposes. 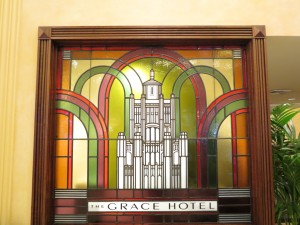 During the 1990s, it was extensively renovated and restored to its former glory, resulting in the return of many of its original features including light fittings, lifts, stairwells, high pressed-metal ceilings, marble floors, wide hallways and elegant decorative ironwork.

It opened as The Grace Hotel in 1997 and my first visit to the hotel was not long after.

Located on the corner of King and York Streets, it is in the heart of the CBD within walking distance of Pitt Street Mall, the Queen Victoria Building, Darling Harbour, Martin Place, Circular Quay and The Rocks.

On my most recent visit, I had a lovely room positioned high up in a corner of the building with wrap-around windows, king-sized bed, flat-screen television and spacious marble bathroom with Peter Morrissey toiletries. The Grace Brasserie is currently hosting the Flavours of Malaysia Food Festival and as you can see from my separate blog post, this is a fantastic event highlighting the wonderful diversity of Malaysian cuisine.