I stood in the semi-darkness mesmerised by the green glow of the curved walls and the names running down it in a continuous stream. Each one of the 600,000 names belonged to someone who had made a pledge to take a stand against hate, injustice and intolerance.

I typed my name in, took the pledge and felt a wave of emotion as my name drifted slowly down amid all the others. The pledge followed a guided tour of the Civil Rights Memorial in Montgomery, Alabama. Run by the Southern Poverty Law Centre (SPLC), it was bombed by the Ku Klux Klan in 1983. 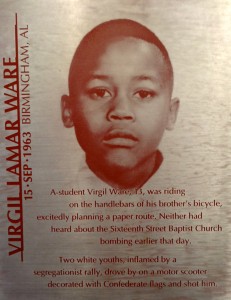 Our first stop on the Trail was a visit to the Rosa Parks Museum where you can re-live the day when a very brave black woman made the momentous decision not to give up her seat on a Montgomery bus to a white person. Her arrest sparked a boycott of the buses that lasted 381 days, prompted the Reverend Martin Luther King Jnr. to take up the fight for civil rights and set that movement on a path to abolish segregation and achieve equal rights for African Americans. Ironically, those events also sealed King’s fate. His words were so powerful and compelling that the only answer for the racial bigots was to silence their speaker. The Trail takes you to the parsonage where King and his young family lived in Montgomery and which was also bombed by extremists. After the bombing, a crowd gathered outside the house wanting revenge. King, who was an admirer of Ghandi, told them to go home and pursue non-violent action.

Kitchens are not usually sacred places but you can feel a certain reverence standing in the kitchen where late one night Martin Luther King felt divine inspiration and decided to speak out for civil rights. The house is pretty much the same as when the Kings lived there with many of the furnishings and ornaments intact. The Dexter Avenue Baptist Church where King preached is also on the Trail and it is a humbling experience to sit in those seats which were once filled to capacity when, at the height of the boycott, King spoke some of his most famous words, setting out his plans for non-violent direct action and his vision of justice and equality. When our guide, Wanda, spoke about those events, the church’s history and its various pastors she did so with a grace and dignity that was truly impressive. Having revealed that she was also a member of the church choir, on impulse she sang We Shall Overcome. In the church where Martin Luther King preached, this was a moment I shall never forget. When we left, Wanda gave everyone a hug and said, “Thank y’all for coming”.

The most pervasive expression in Alabama is “Y’all” and apart from being the Southern collective pronoun, it is also an expression of inclusiveness. Sixty years after the end of segregation, that expression has come to symbolise inclusiveness more than at any other time in the history of Alabama.

For a long time, many people felt shame and avoided the past with its history of intolerance and injustice, but things have changed in Montgomery and Alabama. There is now a pride in the achievements of the Civil Rights Movement. This pride was certainly evident in our African American guides along the Trail. It was also evident in our tour organisers from the Montgomery Convention & Visitor Bureau whose concern that we understand and appreciate the civil rights struggle and the changes was both genuine and endearing. Considering what I already knew about the history of racial discrimination there, I had not been particularly enthusiastic about visiting Alabama. I remember the headlines about Governor Wallace from my youth and the song Strange Fruit (about lynchings in the South) had haunted me from the time I first heard it. But I was also troubled by the treatment of our own Aboriginal people and still am. Perhaps in some ways most Alabamans have come to terms with their history better than we have with ours. Civil rights achievements are now a cause for pride and celebration. There is a feeling of inclusiveness that really is evident. 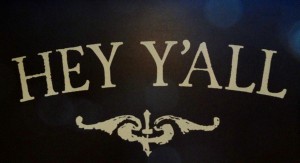 I was pleasantly surprised and impressed by many things about Montgomery. Apart from the fact that it has some very good restaurants and a community garden project, the people were open, courteous and friendly.

Nothing expressed that more than their “y’alls”.

At a reception by the quayside of the Alabama River, the barbeques were frying up all that great Southern fare and I was lining up for delicious freshly shucked Gulf oysters. One of the African American hosts asked me if I had learned to say “y’all” yet and proceeded to coach me with the right intonation and drawl. I was right in there – after all, I do originate from the southern states of Australia. So when they say, “Y’all come back now”, I just might do that. Listen to Christine speaking on J-Air Radio about our visit to Montgomery, Alabama. Her interview with Graeme Kemlo was broadcast on July 9, 2014.