I’m an owl, not a fowl, so there’s not a lot that will get me out of bed at 5am. But Moreton Bay bugs … now you’re talking. Bugs are amongst my favourite foods so when we saw a sign the other day advertising “Bugs on the Beach”, we duly set the alarm to make sure we were at Redcliffe Jetty by 6 this morning. And what a glorious morning it was, with the sun rising over Moreton Bay, an Aboriginal welcome to country, a Maori haka, and the dulcet tones of the Redcliffe high school kids singing the Aussie and United States national anthems.

I’m guessing the US anthem was included because of a certain little event that’s under way in Brisbane today. Some apparently important people have begun lobbing on our doorstep for the G20 and the Brisbane City Council has been sending mixed messages about whether it wants we mere mortals to be there for the show or not.

On the one hand, it’s put the city in lockdown and declared a public holiday. On the other hand, it is pleading with us not to abandon the city, saying it wants our distinguished visitors to see what a vibrant place Brisbane is.

But with military, police and emergency services personnel out in force, armoured vehicles on the streets and more barricades than Fort Knox, I’m hardly going to drive the 35km into town from my Redcliffe abode. It’s not much of a choice, is it? Especially on a day when the temperature is hitting the high 30s.

So here we were having bugs on the beach and getting sunburnt at 6am. Organized by the Rotary Club of Redcliffe Sunrise to raise funds for polio victims around the world, it attracted a small but happy crowd. The world dignitaries were nowhere to be seen. The bugs were cooked on two barbecues on the beach and sold for $10 for two halves – in theory. In actual fact, the bugs were quite small so the chefs generously offered three halves per serve. Danny White (below), the owner/chef at Pines Bar + Restaurant in Scarborough, served his bugs with butter, garlic and herbs. 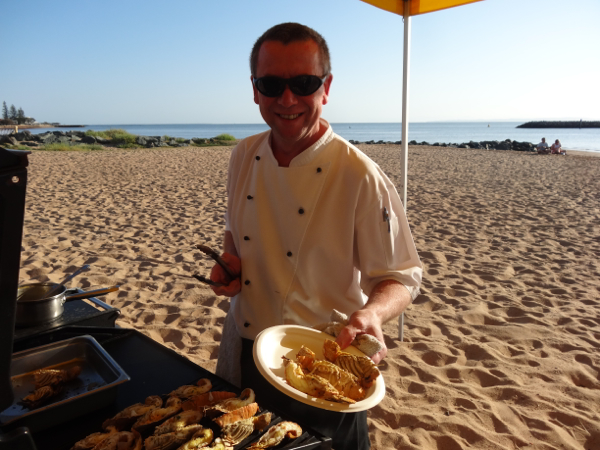 Although they were delicious, we especially loved the bugs served by the team from the Belvedere Hotel at Woody Point (below). Their bugs were dressed with mirin, blackbean, soy sauce, garlic, chilli, green onion, fried onion, coriander, beansprouts “and lots of other good Asian things” (their words). We went back for seconds and then thirds (all in a good cause, of course). We met some lovely folk and then strolled back along the Esplanade, stopping at a stall where Ray and Angie Gannon told us all about the Dugong Collective and the work they are doing to highlight the plight of dugongs and turtles in Morteon Bay.

Fortified with a coffee and almond croissant from Workshop & Co, we were back home by about the time I’d normally be rising. From our balcony overlooking the water, we’ve been entertained throughout the day by a live band, the occasional bikie zipping along the esplanade, and parents and grandparents taking their kiddies to the beach. Tony, Vlad, Barack et al don’t know what they’ve missed.