Perhaps it has something to do with being born to parents who lived through the Depression, but I hate waste.

Chefs are pretty good about not wasting food – for them, throwing away food is akin to throwing away profit. Home cooks, on the other hand, are often guilty of throwing out food.

Not Maggie Beer. Some of her products were born out of her ingenuity in using every last scrap of food.

She created her icecream, for example, because she had stones and skins from the quinces used in her famous quince paste.

She made a syrup from the skins and then had to do something with the syrup. Voila! An icecream was born.

Maggie says it’s a lack of cooking knowledge that leads to so much waste.

During a panel discussion at Tasting Australia in Adelaide, she offered some advice on how to avoid waste: “You don’t cook by recipe; you cook by what you have in the home.”

And those are my sentiments too, not just because it saves money, but also because it’s kinder to the planet.

We had loads of green tomatoes this season. We made some terrific salads, but still we were left with bowls and bowls of unripe tomatoes. So I turned the whole lot into chutney.

I would normally have used onions, but didn’t have any. I had three beautiful baby leeks from the Capital Region Farmers Market, so in they went instead. I only had a cheap generic vinegar and many of the tomatoes were very hard so I had to use a lot of sugar to compensate. I feel sure that if I had used a quality vinegar, and if the tomatoes had been a little riper, I could have got away with much less sugar. I used demerara sugar but you could substitute brown or raw sugar. As Maggie says, it’s all about cooking with what you have in the home. So feel free to play around with the ingredients till you get the right balance of flavours. What are your secrets for avoiding waste? 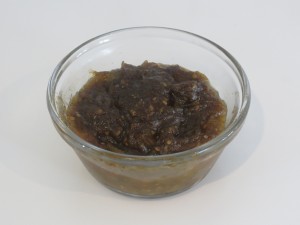 1.6 kg green tomatoes, chopped
3 baby leeks, chopped
3 apples, peeled, cored and chopped
2½ cups vinegar
2½ cups demerara sugar
2 teaspoons salt
2 tablespoons mixed spice
Combine green tomatoes, leeks, apples, vinegar, sugar, salt and mixed spice in a large saucepan and bring to the boil.
Simmer, uncovered, for about an hour, giving the chutney an occasional stir. When it is quite thick, remove it from the heat and spoon into hot sterilised jars.
I like to leave the chutney for about a week so that the flavours develop further. Do put it in the fridge once you have opened it.