My food writer friend, Carol Selva Rajah, called this week to tell me about a great play that was having its Australian premiere at the Phoenix Theatre in Wollongong. I wouldn’t normally drive three hours to see a play but this one, Emily of Emerald Hill, has won rave reviews in Singapore and Malaysia.

The story is centred around Emily’s Peranakan heritage and as we had only just returned from Singapore and Malaysia, where we immersed ourselves in the Peranakan culture, the timing was apt.

Carol was unaware we had been visiting the land of her birth, so there seemed to be a message in the fact that she was contacting me out of the blue to invite me to a play about the places we had recently been exploring.

In Penang, we had spent hours at the wonderful Peranakan House, which vividly portrays the intriguing blend of Chinese and Malay culture that has developed over hundreds of years of Chinese settlement in the region.

I’m a great fan of Nyonya cooking – “nyonya” is the term for a Peranakan woman and the name has been given over to their cuisine. Sydney-based Carol Selva Rajah is one of its foremost exponents, and I was pleased to see one of her cookbooks prominently displayed in a newsagent in Singapore’s Changi airport during my travels. 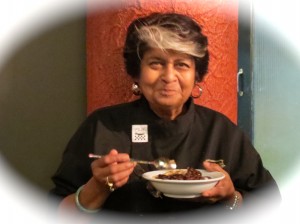 The Phoenix Theatre, formerly the Bridge Theatre, is committed to expressing the cultural diversity of the region, and the premiere of Emily certainly exemplified that. The room was exceptionally crowded but there was a great conviviality and a strong Malaysian presence, not just among the invited guests but also among the posters and decorative objects on the walls.

The theatre has very comfortable tiered seating and is quite intimate, making it the perfect venue for Emily’s monologue. Pearlly Chua gave a riveting performance as Emily, holding the audience in her hands as she took us through the full gamut of emotions, even getting us to join in with singing Happy Birthday at one point.

There’s a beautiful scene where she cooks a dish, taking us through the recipe step by step, and although it is done without props (save for a single spoon), you could almost smell the dish being cooked.

I’m not going to give away the story for it is one you need to see for yourself, but let’s just say Emily is a compelling character. At times, she is bossy and manipulating and it is hard to feel sympathy for her; at other times, she’ll have you in stitches, and there are times when your heart aches for her. As director Chin San Sooi says, she is “beautifully authentic with warts and all. She is an open book”.

First performed in 1984, the play was written by Stella Kon, who is descended from two families with strong links to Singapore’s historic Emerald Hill Road. The play is fictitious but based on stories told in many families, thus providing an evocative portrayal of Singapore life in the early decades of last century.

Pearlly Chua has performed the role of Emily more times than any other actor, and her energy, facial expressions, mannerisms, voice and command of the audience are remarkable – not to mention her memory in being able to recite a couple of hours of almost non-stop monologue.

Emily of Emerald Hill is on at the Phoenix Theatre in  Wollongong until the end of February; from Wednesday to Saturday at 8pm and Saturday matinees at 3pm. I heartily recommend it.

It will also be performed at the Zenith Theatre in Chatswood, Sydney, on March 1, for one night only.