Tamara Newing has made cheese almost every day for the past six years and says she still finds the transformation from milk to curd “exciting and incredible”. Anyone who has watched cheese being made would understand her enthusiasm, for the process is probably more wondrous than any other food production.

It’s an art and a science that’s been practised for thousands of years, proof that it doesn’t require lots of bells and whistles, and that it can be accomplished at the most basic level.

Anyone would be confident of giving cheesemaking a go with Newing’s book, Curd & Crust, in hand. Published by New Holland, the book takes the reader through various cheese styles that can easily be created at home, from ricotta to haloumi, feta and even a French-style Brie.

Fresh ricotta is one of the most rewarding cheeses to make because it can literally be ready in the time it takes to boil milk. You’ll never look at supermarket ricotta in quite the same way once you’ve tried making it yourself.

There’s a similar sense of reward and contentment in making bread, and Newing combines both passions in Curd & Crust. Bread-making was actually her first food love and she has taught thousands of people how to make bread at her own cooking school since the late ‘80s.

Among the bread recipes she has included in the book are a German pumpernickel, herb focaccia, Middle Eastern pita bread and a French sourdough with caramelized onions. Finally, the book has some recipes for cooking with cheese, with some risottos, salads, frittata and this quick and easy Haloumi Potato Pie. 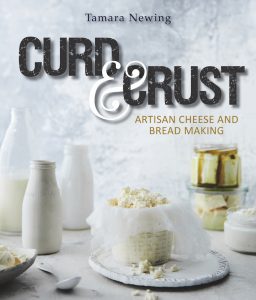 Grease a casserole dish by rubbing softened butter all over the base and sides. Preheat the oven to 200°C (400°F). Create a layer of potato slices, onion, salt and pepper and a little grated haloumi, then another layer, ending with any remaining potato slices.

Dilute the cream or evaporated milk with 100 ml (3½ oz) warm water then drizzle over. Grate or thinly slice remaining haloumi over the top, then sprinkle with paprika. Bake at for 45 minutes, or until golden and bubbling. Serve hot.

Note: For individual pies, follow instructions but use 4 small pie dishes and bake for 30–35 minutes.

Recipe and image from Curd & Crust: Artisan Cheese and Bread Making, by Tamara Newing, published by New Holland and reproduced with the publisher’s permission.