Although it attracts around three million visitors from France each year, the island of Corsica is relatively unexplored by visitors from outside Europe. And judging by Nicholas Stromboni’s book, Corsica: The Recipes, published by Smith Street Books, we’re missing out on somewhere truly exceptional.

This Mediterranean island is steeped in a rich food culture, with a unique cuisine that blends the best of French and Italian food. There’s a great respect for homegrown produce including citrus fruits, grapes, chestnuts, cheese, herbs, fish, seafood and charcuterie.

This beautifully photographed book celebrates everything that is Corsican – not just the food, but the people and the geography as well. From the mountains to the plains to the stunning coastline, the setting is spectacular. The author tells the stories of the characters who live and work there – the chefs, cooks, growers and cheesemakers who contribute to the island’s wonderful cuisine.

Stromboni is a master sommelier who heads the largest wine cellar in Corsica. In 2011 his shop was voted the best wine shop in France. He’s a passionate ambassador for Corsican produce and he has presented a dedicated section on Corsican wine in the book. The lovely recipes in this book, including the Roast Veal recipe featured here, will transport you to the island in no time.

Stromboni says he hopes his stories and recipes will make people want to visit and be part of the island’s “long tradition of sharing, refinement and serenity”. Definitely a destination to put on the wish list.

Buy your copy of  Corsica: The Recipes  from Book Depository now, with free delivery worldwide 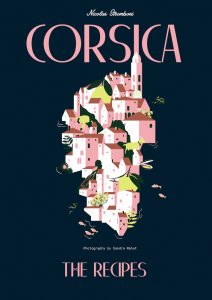 (as at Chemin des Vignobles)

Take the veal out of the refrigerator 1 hour before marinating. Preheat the oven to 160°C (320°F). In a large ceramic dish, rub olive oil into the veal. Sprinkle the veal evenly with salt, then rub in the red wine vinegar until the salt becomes translucent. Scatter over the arba barona and season with pepper. Set aside for 10 minutes.
Heat a chargrill pan over high heat and sear the meat on all sides until caramel-coloured with brown stripes. Transfer the meat to an ovenproof dish and roast for 12 minutes, turning every 3 minutes. Remove from the oven and leave to rest on a wire rack for at least 1 hour. Increase the oven temperature to 200°C (400°F). When ready to serve, return the meat to the oven for 2 minutes, turning it once. Slice and serve with mashed potato.

Note: We often say that there’s no need to add salt to meat before cooking. It’s true that salt sucks juice from the meat, which is why the salt is moistened in this recipe: it won’t dry out the meat and will humidify it. Above all, don’t pierce the meat; by using tongs to turn it, you’ll prevent it losing its juices. To rest it, place it on a wire rack or other support so that the air can circulate around the whole piece.

Recipe and image from Corsica: The Recipes, by Nicholas Stromboni, published by Smith Street Books and reproduced with the publisher’s permission.