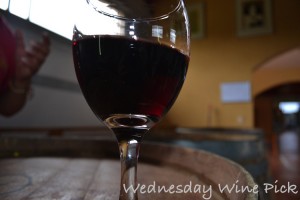 Each year, Graeme Shaw puts aside his best red to be bottled as Reserve Merriman, named in honour of pioneer George Merriman who owned part of the Murrumbateman property on which the Shaw vineyard is now planted. Some years it’s Merlot, some years it’s Cabernet Sauvignon, but in 2014 it was unequivocally Shiraz. “This is the first time that we have selected Shiraz for the Reserve Merriman but it really earnt the right in 2014,” said Graeme. “The fruit was producing a deliciously delicate nose of red and black forest fruits and a beautifully balanced palate between the fruit and the spice.” The cool-climate Canberra district is renowned for producing a softer style of Shiraz that goes beautifully with food, and this one is similarly delicious and approachable. We enjoyed it with an Asian salad and were initially worried that it might be overshadowed by the chilli and other strong flavours in the dish, but it stood up to the task and was a revelation for our guests, who were unfamiliar with Canberra wine. A real beauty.