If you’re suffering from the honey puff blues now that Brisbane’s Greek festival, Paniyiri, has come and gone for another year, here’s your opportunity to tuck into some more of these delicious treats. Known in Greek as loukoumades, these Greek doughnuts with honey, cinnamon and walnuts are on the menu at Zeus, a Greek street food restaurant that opens at South Bank today.

The restaurant is also doing loukoumades drizzled with hazelnut chocolate. We had a sneak preview last night and the flavour gods were definitely smiling on us.

Zeus is the culinary child of Costa Anastasiadis, founder of Crust Gourmet Pizza, and George Kyrprianou from Pony Dining Brisbane, two Greek boys who grew up together. Hospitality is in their DNA. Heading the kitchen is Brisbane-born chef Damian Draper, who used to work at Pony Dining and loves his meat. He’s renowned for coaxing incredible flavours from all cuts.

The first Zeus restaurant opened in Sydney in June 2014 and this is their first expansion into Queensland. Costa says the essence of Zeus is “a sense of sharing – to share the table with your friends, your family … This is one of the oldest Greek traditions there is and it is very important to us.” 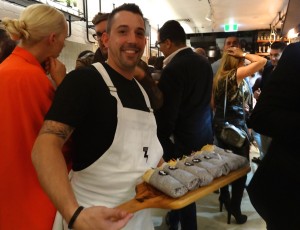 We were impressed that despite the huge number of people at last night’s opening, all the flavours coming out of the kitchen were deliciously fresh.

Succulent chicken and lamb were being cooked on skewers on the charcoal barbecue in front of us, the pita breads were warmed to order, and the wraps were full of lovely fresh herbs like parsley and coriander.

There are eight pita options on the menu created around lamb, pork, chicken, haloumi and soft shell crab. We really enjoyed the lemony chicken pita but our pick of the wraps was the soft shell crab complemented by ‘Aegean’ slaw, preserved lemon mayo, caramelised onion, sweet chilli and coriander. It’s apparently new on the menu and we think it’s a keeper.

All pitas can be ordered “nude”, ie. without the pita, and there are side options such as spanakopita, roasted corn cobs, haloumi, calamari, feta and oregano chips, tzatziki and taramasalata, along with variations of Greek salad – the Aegean (slaw), village (tomato and cucumber), beetroot and green bean.

Save room for the desserts including the loukoumades and the bougatsa, vanilla bean custard wrapped in filo and dusted with cinnamon and icing sugar.

As the success of Paniyiri illustrates, Brisbane folk adore these flavours so it’s great to see these Hellenic flavours coming to Little Stanley Street