If only the walls could talk at Brisbane’s Royal on the Park Hotel. Among those who have stayed here are the who’s who of the entertainment industry: John Farnham, Elton John, Kylie Minogue, AC/DC, Brian Ferry, Rod Stewart, Duran Duran … the list goes on.

I imagine some of them kicked back in the spa suite we stayed in, a spacious suite stretching from the front to the back of the hotel, with city views on one side and glorious views of the Botanic Gardens on the other. According to copies of old news reports in the compendium, there were three VIP suites like this and they once had four-poster beds and cocktail bars. They must have looked quite something for their time.

Although the hotel retains its old-fashioned elegance, the soft furnishings have been brought firmly into the present, with comfortable king-sized beds, charcoal-coloured drapes and flat-screen TVs. The hotel has recently undergone a complete refurb, celebrated with last night’s “Soiree Royale” to showcase the hotel’s grand history. When this 10-storey hotel opened in 1969 as the Parkroyal Motor Inn, its design was controversial – the scalloped sun hoods over the windows quite a talking point for their “curvaceous” look. They, and the 1960s arch at the hotel entrance, have been retained, a step back in time amongst a sea of skyscraper modernity.

The old-fashioned walnut panelling in the lobby, restaurant and public areas also remains, with striking floral arrangements adding to the classical look. During the refurbishment, a fabulous old archway was discovered over the two-way fireplace between the lobby and the restaurant. It had been covered up but now shows off once again. General manager Jan Schutt says it has been dubbed the “archway to heaven”, in tribute to former guests Led Zeppelin. Schutt says that when plans for the refurbishment were underway, loyal patrons were canvassed to determine what the hotel represented and where improvements should be made. “Traditional, classical and at-home” were the common themes expressed as positives, and the hotel had worked to preserve these, along with the formality of the arrival experience, which patrons also loved.

We can vouch for this, as on arrival at the hotel after a stressful day, the staff immediately took the keys and parked the car, telling us to leave the bags in the boot as they would take care of them. As we stepped into the lobby, some gentle old-time swing was playing, and any stress from the day was immediately whisked away. Scutt says they “haven’t refurbished the people”, they’ve stuck with the fantastic team they’ve always had. He also says the hotel’s success lies in its size, which is big enough to offer diversity, catering for conferences etc, but small enough to be intimate, making it suitable for weddings and business meetings. The 153-room hotel has a gym, spa and an attractive outdoor pool area, which took on a special glow at last night’s Soiree Royale. Our suite had a spacious bedroom, a separate lounge/dining area, a smallish bathroom with shower, and a separate room with a spa tub and window to the living area. 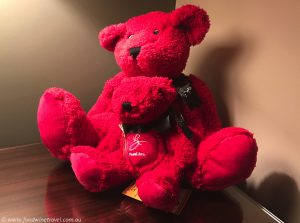 I especially liked the Zambeli toiletries that are paraben-free, something that is very important to me but which is rare in hotel toiletries. We also liked the Bose sound system, the espresso machine and the magazines on offer: Gourmet Traveller and International Traveller instead of the usual boring business mags. On the bedside table, two bright red teddy bears added a homely touch. These were available for purchase, raising funds for Lions Medical Research.

Our suite had a wonderful view over the Botanic Gardens with glimpses of the twisting, winding river that has not always played nicely. In the 1974 Brisbane floods, the water came three-quarters of the way up the ground floor – you can see the line on the wall in the lobby where the water came to. In 2011, flood waters lapped at the front door. One new face at the hotel is that of executive chef Jamie Mackinney, who is passionate about using local produce and putting a new slant on the menu in the hotel’s Walnut Restaurant and Lounge Bar. Mackinney did the hotel proud with the canapés he served at the Soiree Royale – Peking duck tartlets, arancini balls with parmesan, pumpkin flowers in tempura batter, little beef wellingtons with pea puree and onion relish (my favourite), and tempura prawns with wasabi mayonnaise drizzled over them.

The guys from Shuck It! were at the Soiree, shucking oysters from Tasmania, Coffin Bay and Stradbroke Island, and a hugely popular chocolate fountain was the sweet finale. A pianist tinkled the ivories, proving that the grand dame has lost none of her elegance and charm. **Book the Royal on the Park Hotel through booking.com**

Food Wine Travel gets a small commission if you book through this link but it doesn’t cost you any extra. We spent a night as guests of the hotel.