More than 50 internationally-renowned chefs, culinary personalities, and wine and spirit producers will attend. 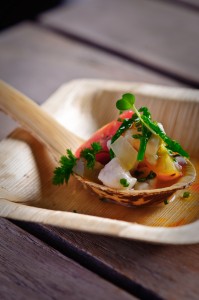 There are four signature events:

Iron Chef Masahuru Morimoto will celebrate the Year of the Dragon by preparing a dinner with friends from Asia and the Pacific. Peter Doyle will cook at this event at The Modern in Honolulu.

A seven-course dinner featuring master chefs who have served and cooked for presidents and/or royalty. Tetsuya Wakuda will cook at this event at The Halekulani.

A tribute to the Hawaiian Makahiki or harvest season showcasing Hawaii’s sustainable future. International chefs will create dishes based on local produce. Farmers, ranchers, fishermen, local producers and chefs will interact with guests. To be held on the Great Lawn of the Hilton Hawaiian Village.

Thirteen celebrity chefs will create a culinary tour of foods from around the world. Local products will be infused with distinctive flavours, spices and ingredients. To be held under the stars, in the area near the lagoon between Aulani, a Disney Resort & Spa and JW Marriott and Ihiliani Resort & Spa.