Today is your last day to see Remember Me at the Australian War Memorial in Canberra. The name of this very poignant exhibition is taken from the phrase that many diggers used in letters to their loved ones at home.

The exhibition features 74 photographs that were hand-printed in the Memorial’s darkrooms from a collection of original glass-plate negatives found in the French village of Vignacourt. 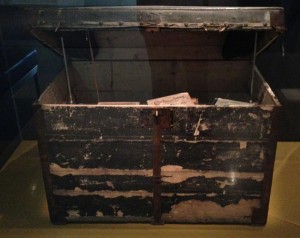 They are woven together with diaries, letters, uniforms and artworks from the Memorial’s collection to tell fragments of stories about Australian soldiers who fought on the Western Front during World War 1.

By sheer chance, we happened to be at the War Memorial on Sunday when the curator of the exhibition, Dr Janda Gooding, was doing a guided tour.

She spoke eloquently about how this remarkable collection came to light. Vignacourt was behind the front lines during the war, and was a staging point and recreation area for troops going to and from the battlefields on the Somme. Louis and Antoinette Thuillier saw an opportunity in the passing traffic to establish a business taking portrait photographs. The “Photo” sign that hung above their door can be seen in the photo above. Most of the portraits were photographed inside the studio against a painted backdrop that features in the exhibition along with the old trunk (above) that the negatives were contained in.

The Louis and Antoinette Thuillier Collection contained almost 4,000 glass-plate negatives depicting British, French, Australian, US and Indian soldiers, Chinese labour corps and French civilians. The Thuilliers would quickly print the negatives into postcards that the soldiers were able to post to loved ones at home. After lengthy negotiations with the now fractured Thuillier family, Seven Network chairman Kerry Stokes bought more than 800 of the negatives and donated them to the War Memorial.

More than 70 of the negatives were printed for the exhibition, including the one below showing the jubilant scene on November 11, 1918, when the 18th Battalion band played in the Vignacourt town square as Australian troops and local townspeople celebrated the end of the war. You might recall me mentioning in previous posts that Maurie lost three great uncles in World War 1. We don’t know if any of them passed through Vignacourt but at least one of them quite possibly did.

Even without a personal connection, however, you can’t help but feel moved by this exhibition. I do believe Dr Gooding was tearing up as she told the stories of some of the diggers. Many of the diggers are unidentified, which in itself is sad. But some of the stories that are known are unbearably sad. 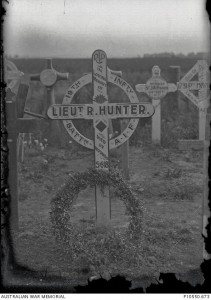 His poor mother lost her husband shortly before the war began, and her only other son was killed in Gallipoli.

Reg’s uniform was given to the Memorial in 1947 by his mother, who returned periodically to sit with it for a bit.

It’s on display in the exhibition, along with some of his personal effects and a handful of soil that she took from his grave in Vignacourt.

Remember me: the lost diggers of Vignacourt exhibition closes today but don’t worry if you’ve missed it. There are plans for it to tour nationally (details still to be announced).

In the meantime, Seven Network’s Lost Diggers Facebook page is worth a visit. Also check out the Australian War Memorial site as it has digitized this incredible collection.